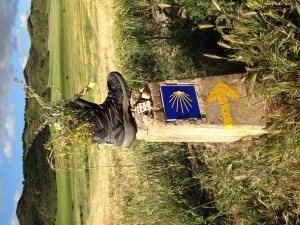 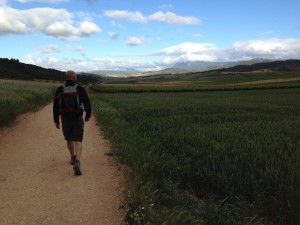 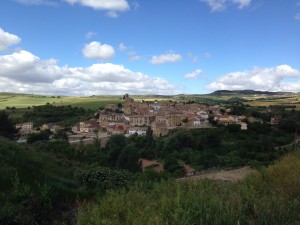 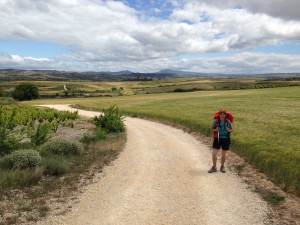 The morning after I hit my wall

Well. The Cyclist was still pissed at me for two reasons. 1. For getting upset yesterday and 2. For turning to someone else as a sounding board in my state of exhaustion (though I’m sure some of that anger directed at me was actually with himself for not being able to deal with the situation).

Whatever it is/was. You know who you are. Thank you for understanding just what I needed to hear.

Due to me being on my knees, the Cyclist had said that we would do two very short days and that was the plan. However, I had paid for the washing to be laundered and dried, plus the private room and the difference it made to my ability to rest and my state of mind was really good.

I went down to the so called breakfast. This was a couple of pieces of French toast, Madeleines and a cup of coffee. I thought there was hot water so I whipped upstairs for the first of my treasured Yorkshire 2cup tea bags. When I got back down there was a group of Spanish women sat down. They looked at this in my hand and I said “English tea”. There was lots of Spanish chatter like clicking hens and some sniggers with looks in my direction. I have to say that I take as I find and believe everyone to be good, nice, friendly, like me, unless I am proven otherwise. So far I have encountered two groups of these Spanish women in the last 5 days, the same two groups. Both have cackled, sniggered and bitched as the cyclist and I have gone about our business. The first group you remember we’re so loud the French had to go back out in the rain to text their ears and I entered into a clothes dying battle with them as the moved our things so that theirs would dry. Even putting soaking wet stuff on our practically dry so it was wet all over again.

It became clear why the sniggers aesthete was no hot water. Luckily I had tried a sample of both flasks into a mug before putting my T bag in. Both were practically empty and both contained coffee. Right. Not to be embarrassed or outdone, I swilled the mug and filled it with cold water then stuck it in the microwave for 4 minutes. They Coven were gathering their things and fetching their boots during this time. When they came back to the kitchen to pick their packs I was retrieving my water and popping my tea bag in the cup. There was a whisper of “ah, and a bit more cackling, but quieter ” as they realised I had boiled water without a kettle. They left and I enjoyed my first cup of tea for what felt like eternity. Absolute bliss.

After my Tea I bumped into Gerrard and Sylvie from Normandy. We were quite getting to like this couple who are seasoned truckers and with sarcastic English sense of humour that Gerrard exuded. Gerrard asked where we had been as they would have had dinner with us. I explained we had lunch on arrival then The Cyclist had refused to move. They said they were heading to Vianna. It was 31.5/20miles away. He asked if we were coming. We weren’t and I had booked a ace in Logrono for the following night which would be no use as it was only11km further than Vianna. I do not have a solid reason why but I said yes, we would go for Vianna. It was 6 miles further than Torres del Rio and over a mountain, albeit a smaller one.

We set off later than any other day as we were only supposed to be going 12 miles. I know. It’s nothing normally but based on my breaking point it seemed like a plan. But I was fired up by my cup of tea that had lifted my spirits and the 9 hours sleep in our own room. My mind was focussed on a long day.

20 miles may seem chicken feed to some of you, but as the 6th day of mountains, stony rocket Boulder river bed trails over mountains, long steep hills in wind that blows you sideways carrying a 10kg pack, it isn’t the breeze it may seem. Ha ha. Breeze. Ha ha. Apart from the machine of course. He advises me he could walk twice as far and not feel it. But, as we established in 2013, he is a special one.

It was a chilly start and I had my fleece gloves on. The Cyclist was the same except for the addition of his winter had and rain/wind proof jacket. This was the first day since day one in the horrid weather of the high Pyrenees that I felt up for the the physical challenge.

We arrived at the first major town and caught up with Gerrard and Sylvie who had left 45 minutes before us. That was a good omen. I stopped at I teeny weeny shop to get fruit for the cyclist and he told me to get us both one of their home made sandwiches. These aren’t like the sliced bread rubbish you get at home. These were about 8 inches long. She warned then slightly for us to eat on the go as a sort of brunch. Two plantonio’s (like bananas but not), one pear, 4 biscuits and the two sandwiches were €16. However it worked wonders and we made our original final destination of Torre del Rio, before 1pm.

This was a lovely old Spanish hillside town and it was so like southern italy. We stopped for a coffee and I did what Sie advised and the cyclist said not to, and removed my shoes and socks. My feet were still covered in the raging rash and were aching but after a very short while I put a clean pair of socks on and put my shoes on. Before I did guess who rolled up. Yes it was Sylvie and Gerrard. She was pleased to see I had taken get advice. I gave them one of the home made biscuits each for after their bread and cheese that had set out in tissue paper on the bench. That was a good Drs returned for the pain au chocolate we had had two mornings before.

We were set to go and left them to it. Only 4+a bit miles to go then we would have made it to Vianna. My first 20mile day. And I did it. I had the iPod on for the first time having reduced my earphones back from the cyclist. I felt I needed to listen to some stomping songs with a beat I would really want to walk with, then get lost on the music.

On the first big hill I had Bill Haley and his comets on. It’s amazing how 50s Rock and roll makes you perk up. Then a bit later when the next steepe incline started, boogie pimps extended version of Somebody to love was playing. I hadn’t touched the iPod as it was just playing tracks. Wham I created the top the tracks changed and Patrick Hernandez started singing Born to be Alive. Well what a fantastic song to lift you when the views are spectacular. I even stuck an earphone in the Cyclists ear so he could listen too. But Oh. It gets better as without touching the iPod the next song that came on was fantastic to seal today’s walking. I was positively skipping up to the cyclist to tell him asking him to guess what the track was. He didn’t stand a chance of course. It was Matthew Wilder-Never gonna break my stride. How flipping apt.

Hoorah. Such a pity that the cyclist wanted to eat soon after. As being outside of the Spanish times for eating us my non eating of fish and meat except chicken, meant we had no dinner.