Calm after the storm – The Common Linnets

Calm after the storm – The Common Linnets.

People started moving about from about 4.30am in the dorm. Noisy is an understatement as the fumbled around in the dark. The Cyclist got up and he gave me a hug and kiss before he left at 6am. I turned over and waited for the hubbub to pass so I could get up and packed in peace. I’m sure that sleeping pill had something to do with it as I was still sleepy. At 7.10am I looked about and all the beds were vacated. Everyone had to be out before 8am as that is the Albergue rule, do I set about getting myself sorted. I wouldn’t really want to stay any longer anyway.

Once packed I lugged on my now very heavy pack, checking nothing was forgotten and headed out in search of the bus station. Luckily it wasn’t too far as it was down on the main road behind the museum. Unfortunately though at 8.15am everything was shut up. No sign of life at all so I headed across the road to the park thinking I could sit and wait keeping the station in sight. It wasn’t long before a sleepy looking Spanish chap came and stood and was watching me. My bus was 9.50am and it was only 8.30am so I thought it safer to head back into the town. No point in being a sitting duck.

Back into town and had a walk around but figured I am supposed to be texting my feet rather than carry an even heavier pack so I went back to the square by the Cathedral and sat to while away an hour. A tandem pulling a trailer turned up with a German couple on. I said maybe I should try that with my husband but he would want me on the front to make sure I was peddling. The German guy said my husband could not be a winner then as he always second past the post. This maybe true but he would rather make sure I’m not just along for the ride!

Then a Spanish guy on a bike approached me wanting me to take a photo of him with the Gaudi museum behind. I obliged but declined his offer to reciprocate. I headed back to bus station at 9.15am and saw a German girl. I asked if she was waiting for the bus station to open and she was. She had only started in Leon two days walking and she got blisters by the time she got to Astorga. She had gone to the hospital and the doctor said no walking for 5 days. He feet aren’t as bad as mine! She had only rested yesterday and was looking to move on so she could do the second mountain tomorrow. I didn’t feel quite such a whimp for not walking today after hearing this. Eventually the bus arrived and I got on. Here I go on a different type of adventure.

At Ponferrada an American lady got on whom I recognised. She was one of the two Americans we shared a room with in Ages. Remember I told you about the large guy who looked like the actor from that movie Cocoon and who had snapped his fingers at the Spanish owner shouting “garçon!” Well ages was that day. She hadn’t recognised me or seen me but I moved backwards and went to sit next to her. She was a little surprised but was pleased to see me. We chatted and caught up which was nice and she walked with me into Villafranca as I was slow, which I was very grateful for. She saw someone else she knew too and once we came to my B&B we said our goodbyes and Buen Camino. I guess we may not see her again.

I rang the hell of the B&B but there was no answer. Not to be put off I tried again this time with a longer more annoying ring. It must have worked as a young guy sporting a thick bushy black beard opened tithe door. ( what is it with beards?). He said he wouldn’t open until 2pm and I would have to come back. It was midday And I asked if I could ease just drop my pack off. Thankfully he said yes I could leave it there. I asked if there was a shop open and he said he didn’t know and to go to the square. I had no idea where I was but he pointed behind so off I went.

On the square I found a tiny shop open and got some cheese, bread and Madeleine’s. Then I headed across to a cafe and found myself ordering a menu del dia. It was Sunday and I had no idea if they would all shut after lunch so Carpe Diem, better safe than sorry. I chose a seat near the edge of the first cafe so I had a good view of what was going on. I had a couple of hours to kill so a bit of people watching would kill the time. I don’t often get the chance as the Cyclist likes to sit where he can see what’s going on and I therefore have to sit with my back to everything.

A skinny old woman hippy got out of car. She was German. It looked like she had Picked up or been picked up, by a Spanish guy. She was wearing a small Stetson style hat, with red green rope around feathers and badges at the back. She called across to me to ask if I was deutch no sorry. She made some noise and waved her hands about in disappointment that was relief for me. Not long after a young guy walked past and she shouted and called him over. He was ignoring it at first but she was persistent so he came across. He had big back pack and also carried a guitar. She spoke to him which from what I could make out, they must have both been staying in the same ace some time before and she was getting him to recall it. She bought the chap a coffee to entice him to stay for a while so he did. Her Spanish chap appeared some time after and she introduced him to the young chap as Ramos. It was an odd situation but interesting to watch. After his coffee the chap got up and began walking again with relief I suspected.

People were making about, Some locals some pilgrims and it was good to people watch from a view point well chosen. Pilgrims were pouring in now. Some coming to the end of the days walking some passing through. Some on foot and some bicycles. There was a cafe opposite and the Owner was pacing about but he had no clients. He was being really July and saying hello Buen Camino to every pilgrim walking past yet his terrace remained empty. There are 4 cafe restaurants here on the opposite side with quite a few people sat. I don’t know why but it’s as if there is safety in numbers. I have a soft heart and was hoping somebody would sit down at his terrace soon. Which much later they did. He stopped pacing now and was being attentive to the customers needs.

One couple of pilgrims to my right and the young chap is bright pink/red. Really pink red. I’m guessing too much sun when it’s been in the 30’s and he didn’t use sunscreen. The Spanish women are carrying fans and wafting themselves. A family arrive in two cars they are very smartly dressed. The Grandmother is stick thin in cerise shatung silk shift dress. Other women dressed are walking into the square too, all dressed lovely but all jet black hair regardless of age. The Spanish women in the cities have been very smart but in the sticks they haven’t been so, until today. I wonder if the women have large wardrobes crammed with lovely clothes or a few for dresses for special occasions? Me? Well you know me I guess. Lots to choose from no matter what occasion and shoes to match of course.

Pilgrims are a scruffy bunch. No wonder we get treated or fed as such. Some blokes walking through could not have washed their clothes for weeks they are filthy. In fact the Cyclist looks a little like this. And me, in shorts, sport shirt and flip flops. Everyday. When would I ever do this. Never. I miss my wardrobe.

There must be a christening or something as more party dressed Spanish arrive. One family with one son, mother and husband wife. She was slim in hips but large in tummy and wore a black Lace dress barely covering her lower assets but her legs are white and are varicose vein riddled. I love short skirts but I know there will be a time they will become an item I no longer wear. There are families walking with their daughters in white dresses like wedding dresses. These girls look about 10 years old. There is definitely something going on. Then a policia locale starts walking up the street with his notepad taking down the registration numbers of the cars. There was a scurry as the Spanish began to scramble to their cars to move them before they got ticketed.

Just after 2pm I wandered back to the B&B with all intentions of coming out later for a look around. It was not to be. After checking in and a shower I sat on the bed and began trying to update my blog and letting family know I was ok. About 6pm I had an email from the Cyclist saying he had completed one days distance by 9am so he kept going over another mountain competing a second day’s stage by 2pm. He checked into a hostel by the river after looking at the Albergue and deciding to give it a miss. He had eaten lunch and was now settled for the day. He said he would arrive about midday tomorrow. He had competed 30 Miles today over mountains and had a further 20 miles tomorrow. That’s good then though i can’t believe the distance he covered in the time today as I knew he had two high and difficult climbs and dangerous descents. But I’m not entirely surprised. This is the Cyclist after all and we all know him to be a mechanical freak of nature.

I ate my dry bread and cheese slice with a drink I had gotten in Astorga and awaited tomorrow when I would see my cyclist again and decide what we do from here. 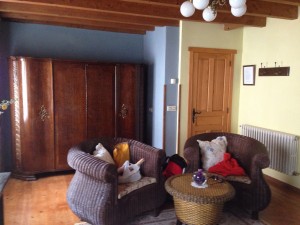 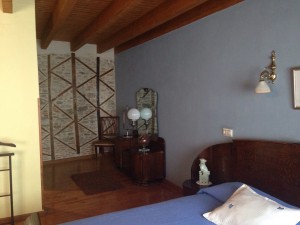 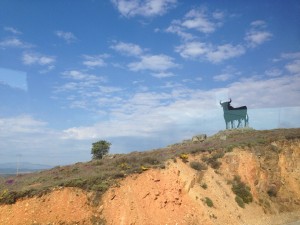 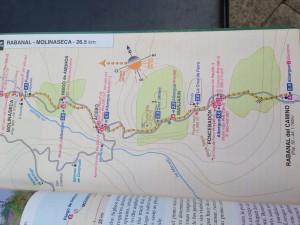