Far from any road – The Handsome Family 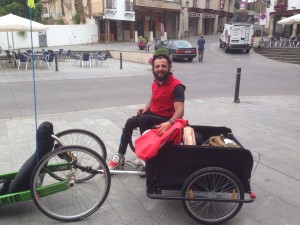 Tuesday to lugo and Sarria

After a lie in this morning (I had better get out of that habit quickly), I packed my pack with our stuff and lifted it onto my back to head out. I walked up to the Plaza Mayor again to take a slow breakfast to kill some time before my bus.
Pilgrims began to dribble in, first taking in the square with as a surprising and unexpected gem. Then they walk by the cafe’s taking in each menu before deciding which one. We do this, or should I say I do it, though I do hate going back to one once I’ve passed it so sometimes I just say “this will do” and live by the decision.
Then one guy on a low bike using his arms to pedal arrives. There is a woman with him and he is pulling a small trailer containing his wheelchair. His wife untied the chair and helped him into it. His bike contraption was called “quickie” and it was a moving and inspiring sight. I was very humbled. The chaps arms had huge muscles though this is unsurprising.

They came to have breakfast at a table near mine. I plucked up the courage to ask where they were from. They are from Rome and started in SJPP, but they will go back 20Km later to start their next stage from Ponferrada. The chaps converted bike is causing as much discussion and inspection as my dads Scimitar GTC used to do. He looks Italian now I get a better look. Though he is sporting one of those big beards like many guys we have seen. Both Spanish and pilgrims alike. Some look just like the way Jesus is depicted in pictures that we see it’s quite striking. Personally as The Boss ( now unfortunately ex-boss), will confirm, these bushy things really don’t do anything for me and potentially hide a gorgeous face. What a waste. But this is of course only my own humble opinion. The guy had gone somewhere and I asked the wife permission to take a photo of his bike. One thing I have learned is to ask permission if you can.

I enjoyed my coffee for the road as it might be a long day of waiting for buses in places I don’t know and a language I don’t speak. That German woman was in her chair back at the same cafe again, still sporting her hat. The Spanish chap who drove her here on Sunday, and who she called Ramos, drove by yesterday kerb crawling scouring the cafes for her. She had left an hour or so before and once he saw she was not there he drove off. The cyclist and I bantered about the possibilities of that relationship. His were more rude than mine. And here is Ramos again. She had already left by this time, but today he didn’t appear to be searching.

I asked the Italians how far the cycle. 50-60 Km per day. Explained the cyclist doing mammoth walks to get over the mountains and he was surprised. Many that don’t know the machine would be. He let me take his photo and gave me his email address. I will send him the photos later today. Just then Ramos arrived. This time on foot and not searching the chairs in the cafe opposite. The German woman was there earlier and had left already but maybe he had given up looking for her. Who knows.

I Made my way to the bus stop to make sure I am there in good time. Hanging around on the side of a busy main road ant the most comfortable of feelings and the bus is late. When it did arrive, The driver was giving my printed ticket some scrutiny and I began to worry that there was something wrong with the ticket. But no, he was looking for an seat allocation number and I had to sit in that seat. It was number 4 right at the front. Result! Good job as it was busy. This wasn’t like the UK buses. This had a TV and was playing bugs bunny cartoons with Spanish sub titles. Pity I didn’t have my earphones with me. The driver headed onto the motorway so I’m guessing this is a direct bus. We headed though the lush green mountains and I saw what I was missing today. I know in my head that the Cyclist was right. That I shouldn’t try to walk too soon else I will be back to square one and then it would all be over. This way I get to do the last days into Santiago and out of 35 walking days I will have only missed 4.

This bus driver is a young guy in his slick RayBan sunnies even if it is overcast today. The drivers seat has super suspension and he is bobbing up and down over every bump. It could almost be a fairground ride. Radio Galacia is playing with little if any music. Flies are hitting the windscreen just in front of me and ending their existence with a big splat! It’s just like the start of the movie Men in Black. Looking around the bus it could be the movie. I wonder what Galaxy or planet the other passengers are from? Ha ha.

It’s drizzling as we approach Lugo and it looks a big city. At least I can just catch a bus from the same station where we get dropped off. I went to the ticket place to get a ticket. The American women in front were buying tickets to Sarria so I knew I was at the right desk. Then a women tried to push in front of me. She wanted Sarria too and apologised saying bus driver had said quick quick. Oh my there was one leaving. I got my ticked and zoomed to put my pack in the luggage compartment and got on. What a strike of luck. This bus is very busy with at least 80% of seats taken. I had visions of being sat in some sleezy station for ages so I am very grateful to get straight on a bus. No TV on this one and it will be stopping at all the stops along the way so we shall see what we shall see.

At 2pm I get a text and its from Twitter. It’s the cyclist sending out a tweet to say he had done 42Km of tough mountain trekking today taking him into Galacia. So his day is finished before I have arrived in my destination. He did say this was likely and that he would be nearer Sarria by the time he finished today than I would be at that point in time. He may well be right.

After getting a little lost out of the bus station I eventually found our resting place. Not a hotel just rooms but clean enough and cheap enough. Checked on with the Cyclist by email. He wasn’t bothered about going to a communal dinner in his Albergue and that’s putting it mildly as the Physioligist will testify. He also found himself in a room of twenty chattering women who, not noticing he was there as he tries to make himself invisible, were walking around and passing wind loudly and frequently. So much so he had to email mento tell me of his horror at the whole thing.

I forgot to tell you of the other thing that the Cyclistvtold me yesterday when he arrived. He said he had just seen a snake eat a rabbit. What! He said as he was walking along he heard screaming which made him look around. In the ditch he said a snake had coiled itself around a rabbit and it was squeezing it so the rabbit was making a screaming sound. It was a big black snake. Then the Cyclist said he thought he should get a photo but the kindle was in his pack and by the time he had gone to get it the movement had made the snake move and it dragged the poor little bunny into a hole. Remind my not to go into any ditches if I’m in need of a bathroom. Not that I have been but never the less. The Cyclist said this snake looked a nasty bugger just like the black snake that chased him hissing in Italy when he rode past on his bicycle. With nicer climates come nastier animals.

It’s another great song guys. Name the TV series it came from that was also worthy of the song.