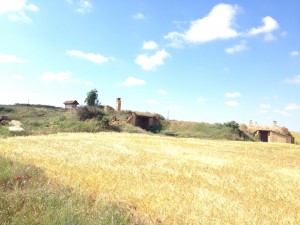 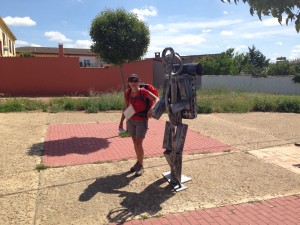 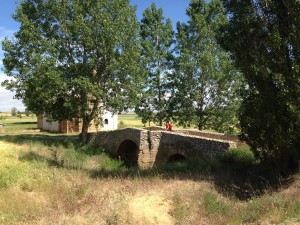 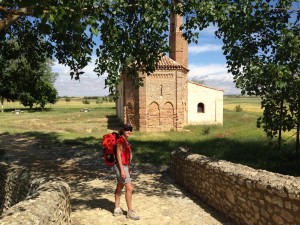 The Cyclist was awake early today and I checked the time and it wasn’t quite 6am. Oooh. Is it really that time. It was quite noisy last night as the doors to the rooms are on to a big atrium with the local pub at the bottom. The cyclist took to ear plugs. After 10pm and no sleep, I took my first sleeping pill. I don’t know. For me the jury is out on whether these work. I know the sleeping pills that Aunt Joyce (sister of Mrs Chimney and aunt of the Cyclist plus to me some one I love dearly), gets she gets a brand called Limovan and I have asked for them but have been told I need a prescription. I’m not surprised as they are Viagra based though I can honestly assure you that all the have ever done to any of the family that have had the need to use them, is get them to sleep quickly and soundly. No side effects.

Finally, I did drop off to sleep but at what time I could not say. All I know is that I was tired when we set off. Last night the group had been discussing where we were all walking to tomorrow. We all said Sahagun, as that was 22.5Km and the next town was an extra 10+Km which was too far to wAlk in one day as that made it 20miles which is a long wY in the heat carrying you back pack.

Although I’m sure many people were on their way before us, we didn’t do too bad and it was 7.20am when we started our walk. The French couple were in front and the cyclist was in a black dog mood and didn’t want to talk to anyone. Just as he was telling me to slow down, they turned, saw it was us and waved. Being in one of those temperaments today he now said we had to speed up and pass them keeping the speed up afterwards. So we did. Me grimacing and limping as it hurt to put pressure on my left foot with that darn blister.

One of the things this walk had made me consider is the marching the chaps would have done in the war in those he nail boots and thick scratchy heavy uniforms. Marching along everyday in lightweight gear and walking shoes certainly makes you think what it would have been like for them.

Along our route today we saw a lot of houses built underground or into the small hills. A front door, maybe a small window next to the door and chimneys were all that have them away. I guess they are cool in summer and warm in winter however the thought of living in darkness like a cave is not something I would like to do. Ha! But hark at me. We live in a 3storey mill/grain house conversion with one third of the house predominantly under ground, though the windows do let light in. Maybe that’s why the Cyclist has hobbit tendencies?

Apart from this there was nothing of note on the walk today and to be honest, for some reason it felt a longer harder day than it was for walking. So when we approached Sahagun we looked for a Hostel. The cyclist had picked up a leaflet advertising one and a double was €30. This was less that advertised and we could see why when we got there. It was under some refurbishment. However the room was clean, no bugs around the bed ( I do give places a check over) and we had our own bathroom.

I have begun to appease the cyclist by not showering immediately on arrival at a place, but squirting some deodorant on and getting out to eat before showering. This works well as places stop serving between 3-4pm (each place is different) and if we are sat in the sun, it saves me from showering twice. Today was such a day and we struck luckily with the location of our hostel as it was right by the main square with shops and restaurants all round it. The square as busy with locals taking lunch and partaking of the menu del dia. And so did we. The Cyclist had shellfish paella followed by fresh fish with chips, then ice cream and all washed down with crusty bread and a full bottle of vino tinto. He thoroughly enjoyed it and was even more happy that it was only €10 each, not that it cost him anything. But still it was/they are good value.

We wandered a bit to find the supermarket. These are so tiny from the front you would blink and you would miss them. And for a large town having one supermarket that is the size of Bewdley Coop and it’s the ONLY one around, is a concept unusual to us. There are supermarkets everywhere at home. We got provisions on for a bedroom tea and enough to get us through tomorrow as there was another one of those long long stretches with nothing.

We had backed ourselves into a corner with no forward planning ( I have been going with the flow suggested by the Cyclist each night rather than my plan I made before setting off, kindly printed by Angel1).
We either had a very short day or a long one with this long stretch where there was nowhere to stay. 12 miles or 18. It was agreed to go for the 18, but I was really worried as the blister on my heel had gotten worse with today’s walking and I was not coping with its pain too well.

Alarm set for 5.10am and sleeping pill taken, let’s see what tomorrow brings.