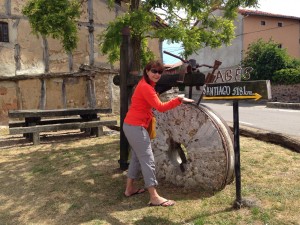 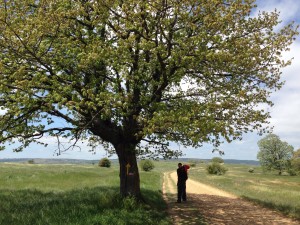 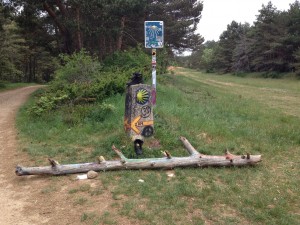 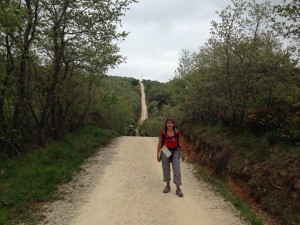 Well, as he promised the cyclist packed most things in my pack and began walking. We had breakfast at this place in Beldarado as they did boiled eggs so the cyclist wanted something more than French toast and biscuits.

We set off later than normal at 7.45am. Usual weather usual clothes with gloves too. The extra weight didn’t slow him down. Along one stony dirt track Enrique came through my earphone. (I had decided to put the iPod on to try and divert my attention from the aching pain of my feet but using one earphone so I could still hear what was going on.)
Anyway, the track was ‘Hero’ and when the chorus came on I could see the Cyclist some feet in front, loaded up to help get me to Santiago. It was a bit overwhelming actually and I had to tell him again how grateful I was.

The first climb came right after we stopped for a coffee. There wasn’t going to be anything from this point so stopping now made sense. It was right on a corner with the busy road and truckers and Perigrinos alike were taking their fill. I had taken my shoes and socks off to give them some air. But some ten minutes later we were off. The first climb was quite steep and despite his heavy load the Cyclist still zipped up faster than everyone else. After walking on the plateau of the top it was time for the down and up of the next one. I have included some photos and you can see the steep roller coaster like down and up behind the cyclist and if you look closer way in the distance you will see someone on the path were going to tread.

This plateau went on and on and to be honest was monotonous with the wind billowing because we’re were at a fair height of 1150M. Along this path we came upon the chap that kept everyone awake with his snoring and then decided to wake up and make noise as he left at 5.30am, completely refreshed leaving all others bleary eyed. As we approached I shot invisible daggers as I had been yawning from lack of sleep all morning. I had read that after a few nights you get into this communal sleeping but I have not found that at all.

Eventually we came to a post that turned us left and began our descent. It couldn’t come fast enough as my heels were throbbing. At the hamlet there was one Albergue and people were queuing up outside waiting for them to open. It was a no horse place and I said I would rather carry on the 4km to the next town as there were two Albergue’s and they might not be as rammed. One foot in front of the other. Most of this route was like walking over lumber edge and when we came to a clearing there was a great panoramic view. The Cyclist spotted a pink fleece on the ground and picked it up handing it to me. Obviously someone had dropped it and would be missing it on the chilly morning. I checked it over and it was a size 10 indicating it was UK bought. Not USA as their size 10 would be much bigger.

So fleece in hand we started our descent to the little hamlet called Ages. As we approached there was a lady walking back up. I knew it would be the owner and at least she wouldn’t have to go too far now. She was Irish and was very grateful. We stopped at the first Albergue as this was only small with only 8 beds. We checked in and agreed to communal dinner that night. Were were in a room with two bunks and we were given the top. Also in the room was a lady from LA who sold real estate (estate agent to us) but she specialised in second homes for the wealthy. And a guy from Chicago who looked and sounded like that actor from the films ‘Cocoon’ that were out in the late 80’s early90’s. The old guy with a moustache and big tummy.

We went out a few yards further to get some lunch as the hero was turning into hulk as he wanted food. If only the wind wasn’t gusting it would be a nice day. After lunch we moved up the hill a few yards to the bar attached to the municipal Albergue for a beer and vino tinto. Who should come ambling up the path but the little Irish fella who we had seen briefly as we left Beldorado. This morning he was still with the very tall Austrian girl he walked into the bar with the night before and he was proffering to be agroforestry to her Gandalph. But now he was alone. We sent him back to our little Albergue to take the last bed and we didn’t see him again that night oddly.

Once we had rested in the windy sun for a while we went back to get showered. I went downstairs leaving the lady asleep and the Cyclist watching a movie. The chap from Chicago was down there too together with the brother in law of the owner as the wife/sister had been taken into hospital so he had flown from Tenerife to help out. The American chap called Dan wanted his attention so he clicked his fingers and shouted Garçon! Not in a joking way he was serious. It was cringeworthy. Luckily the guy took it in his stride by holding a tea towel round his waist then scurrying over before a small bow. I honestly think the whole thing went over the Americans head.

Communal dinner was not different to others. Garlic soup was watery broth with chunks of garlic and bits of baguette in it. I didn’t want the fish or pork so I had cold spaghetti with one spoonful of salsa on top. The Cyclist had the pork which was just meat only and a small clementine sized pigs cheek braised in red wine. It looked black and burned and one pilgrim made noises and faces so the guy from Tenerife came over behind her, picked her knife and fork up and cut the meat to show her it was not at all burned.