Hot in the city – Billy Idol 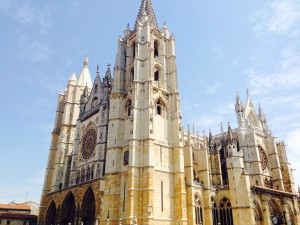 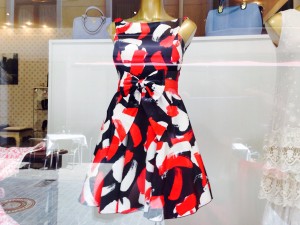 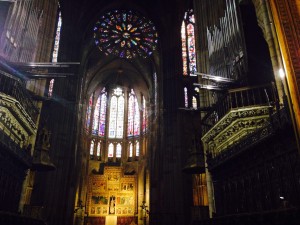 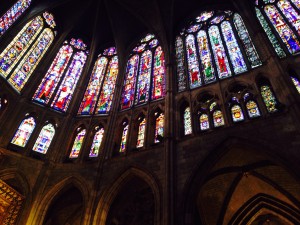 Waking up and realising you don’t have to walk today is the best feeling. I don’t know whether it will be this relief when we finally stop but today it was definitely relief. We do tend to wake at the same time as usual anyway and once we were fully with it we got up and went out in search of breakfast. I said that today should be a day of eating and rehydrating plus trying to rest my feet. I managed one out of those three.

Unfortunately even in my flip flops I could hardly walk. It’s a bit like when you hurt your back. You look ok and your brain knows that it should be able to do things like walk, bend and sit, but if you try to move the pain rips through you. It’s the same for your feet. I have had both and can say this unequivocally. We went to a cafe serving breakfast just up from the hotel and I ordered what I thought would be toast with ham and cheese on the side so I could switch my jam for the Cyclist’s cheese. What we got was a toasted open bun, fried Parma ham, a little pot of olive oil and some mushed fresh tomato. “What’s this” he asked. “I don’t know, I thought I’d ordered that” and pointed to a picture menu. Hey ho. It was just like bruschetta actually except you were given the constituent parts that you had to assemble yourself. This was actually a chocolate cafe. They love chocolate here and most cafes serve a breakfast of six long sticks of donut with a cup of melted chocolate to dip them in. I look at them longingly but know they are really calorific so I haven’t tried them.

The Cyclist said he was going to go to look for a monument bridge he had heard about and I should go back and rest my feet as it was obvious I couldn’t walk. As it was, I said I wanted to try to find a little supermarket where I could get a if bottle of pop to help me take on liquid. I know pop isn’t the best thing but as I’m not a lover of water, I thought mixing pop with water to give it flavour. I also needed a pharmacist for more ibuprofen as we are both on 2400mg a day now and a cashpoint. So I just followed him down to the new town which was the heart of the city. We wandered right through and found a pharmacy by the river who luckily told us where the nearest supermarket was. Once pop and fruit were obtained we headed back. However, there was a bit of stopping and starting as we passed various dress and shoe shops. If there was something lovely I took a picture to send to my sister. She completely understands my love of shoes and dresses and I could not say which of us has more than the other. My Angel 2 gets it too however being younger than us, we sometimes like things that she does not and vice versa. But not always. For instance I am fairly confident she would like the dress I have included, which Blondie was encouraging me to buy and post home. I didn’t.

Now it was getting on towards lunch and the cyclist was talking about eating again. Well today was a good, water and rest day. We wandered back to the old town and one of the squares we had discovered last night. I must have been tired or something as I ordered pork for me thinking it was chicken and I know Lomo is pork. So when the second course came I had a choice. Pork or some obscure fish I ordered for the Cyclist. Damn. Well I had to try the fish. It was dusted chunks of white fish. It didn’t taste of fish so I gave a few chunks to the Cyclist and I ate the rest. I’ve always said that even if we were stuck in a dessert or some other obscure place and the only thing to eat was something Bear Grylls had caught, then I would rather go hungry. However, this is not such an extreme case but it does make you contemplate whether taste and fancy would go out of the window. I don’t think it’s hunger that is making me try things I would never do normally as much as the fear that the Cyclist would be cross again. Once again the pudding included was a cornetto or an apple. But then again this was €12 including a bottle of red table wine so we are grateful.

After s little rest at the hotel I said we should go out in search of some dinner. I’m not hungry, far from it, but we have not eaten as well as we would have at home and this was a day of rest and sustenance. Oh, the weather had changed since we had gone in. The clouds were forming and there was something in the air. Then a clap of thunder in the distance. I needed the chemist again to get some Betonine, that had been recommended to us to help dry the blisters. By the time I stepped out of the shop the rain had begun to fall and all of the pavement restaurants were scrambling to get their guests and food inside and clear the tables. The packed streets were now empty with all the Spanish huddled in shop doorways and under restaurant canopies. The Cyclist noted the complete lack of umbrellas and that until it actually started to rain that restaurants had appeared to disbelieve it would actually rain.

The Cyclist said that it was only a shower, but I have seen these Spanish storms before when I stayed with his aunt in the mountains near Alicante. When the heavens open, they really open. Not like us. It rains for hours really heavily. But spurred on by his thoughts of a shower we braved the rain running between shelter and sloshing through the streams in the road as there are no drains in Spain. I was in my flip flops of course and this made for treacherous walking as I was slipping all over the place. We ended up back at our hotel as it seemed that the restaurants were packing up as the streets had emptied and the storm looked set to stay.

We gave it one more try as the time was getting on and this time tried the streets on the opposite direction. I saw an sign for menu del dia for €15 and it had something I could eat. Personally I didn’t want another full dinner but this was better and I knew that the Cyclist can eat for England if he is hungry so in we went. It appeared to be a tiny bar and we walked through towards the back where there was another room. It was decorated really modern and nothing like the tiny hole we had walked into. The meal was a surprise too as everything was home made and presented beautifully. Even the pudding of homemade chocolate mouse. The Cyclist helped me eat my meal (I put things on his plate and he just ate) and after he was very satisfied. Now for bed. Zzzzzz