I will survive – Gloria Gaynor 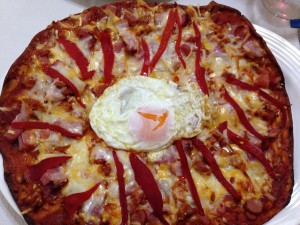 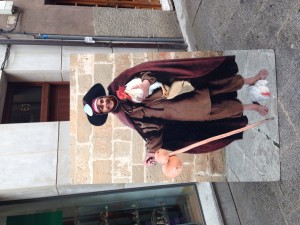 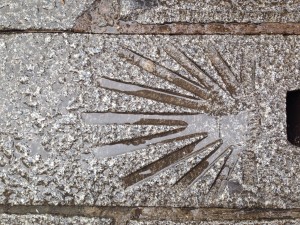 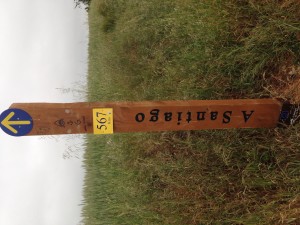 We set off a little later than normal today. We had said we wanted breakfast and o wish we hadn’t. It was ok but it was toast and coffee in the owners front room. It was their Spanish regional elections today and the husband was getting ready as he had to open the polling station.

Putting my shoes on was not pleasant on the slighted and I was in trouble from the start. There was nothing I could do apart from put one foot in front of another. Just like every other day it was really cold, very windy and overcast and the roads wet as it had rained over night. Who knew this is typical for northers Spain when a little East the French coast is lovely and hot.

Today’s terrain had the odd hill sprinkled through and was stony and rocky. The ground was hard and very uneven dried mud if not stony. You could see the red soil of Rioja. At the first village we saw 3 women chatting and bending down to pick things from the grass verge. I wondered what it was. As I got up behind I could see one women had a attic carrier bag over half full. No. Surely not. But oh my it was. Snails. They were foraging in the damp grass for snails. I drew beside them and bid them Buenos Dias, then pointed to the bag then my mouth questioning if these snails were for eating. Si si, and much cackling from them. I pulled a face and smiled and they found this amusing. Up the hill into the town i went to catch up with the Cyclist to relay this story.

Today a German guy came up behind us then started to get chatty. I tried to respond not to be rude while the cyclist dropped back for a bit. Some people on this route astound me. Not those that walk a few Km then get picked up by a coach and taken further on. Nor the Americans who gave seen it and done it and know better than you. But people Le the Swiss lady from a few nights ago and now this guy. Here is what he told me.

He is sick. He walked the Camino last year and competed the SJPP to Santiago on 22 days. He did this by walking 40-60Km every day (makes me feel weak). He had cancer and has had Chemo. It somewhere near his nether regions as that’s where he pointed. His son is on the camino 200Km in front of him. (now for the biggie). He lives in Stuttgart and left his front door on 7 April and has walked all the way here. What! He said his boots fell apart a week ago so he had to buy new ones. These were made in China and after a few days walking he had to stop in Logrono for 3 days from blisters. He was looking for a shop for new ones. As it is Sunday and we are in the back of beyond he won’t be getting any today.

The Cyclist caught up and I brought him up to speed on the story. Then as both fast walkers they marched along together chatting for a while while I grimaced with each step behind.

Before long though, the cyclist had to slow down and wait for me so on he went to catch up with the next people in front and tell them his story. We had planned to a shorter day today to help ease my feet. As the day wore on I got slower as my feet got more painful. I was trying as hard as I cod to go as fast as I could. We came to the village I thought we won stay in and I just kept walking not saying anything to the cyclist, thinking it’s ok as there is another town 4Km further and if we could make it there then we would be a little further on the next day.

This was a bad mistake as it was about 1pm and we had no drink etc since 7.30am. When we got to the next place there was nothing but a huge very expensive restaurant and a couple of houses. By now I didn’t want to put any weight on my feet and I really needed the bathroom. There was nothing to do but carry on to the next town some 7km away up a hill. After about ten minutes I was in a state and had no idea how I could get there and the Cyclist was talking about doing the three mountains tomorrow. I am disappointed to say I started to get upset. The Cyclist was asking what was wrong and I told him I didn’t think I cod get over the climbs tomorrow and I could hardly walk. He was unusually understanding saying that I had had a tough day yesterday and pushed myself to far and now my morale was on the floor. Good days and bad days he said. I would like a good day sometime soon when I can walk without it feeling like I’ve already walked the length of England.

He stopped me and put some of his stuff into pack giving me his now much lighter one. He said we had to get to the next town and if this it what it took to get me to walk that distance then that is what we would do. Not having the total weight on my back was nice however it made very little difference to my feet. We eventually came to this town passing the first Albergue to find one on my recommended list.

We got in tune door just before another couple and snagged the last two beds in a room for 4people. This was also a local restaurant and they were serving lunch we were told. After putting our bags in the room and fining were were on top bunks over two ladies with an adjoining door to another room for 6, we went to at lunch. We both ordered a pizza and the waiter checked as I think they were serving lighter lunches and people usually shared the pizza. No thanks can we have two please. So he said “I go kitchen and show you pizza plate”. He came back with an oval plate dinner sized. We said ok and asked for two please.

I could not eat all mine and gave a quarter to the cyclist who wolfed it all down. Only once we had finished did we go for a shower. At least our room and the restaurant are on the same level. Other rooms are up or down stairs and I can barely shuffle.

It was late in the afternoon by then and we both climes up our bunks and lay down. When it came to communal dinner time I said I was still full. I could not eat anything and paying for a dinger was a waste as I wouldn’t eat anything. The cyclist agreed to not going so I went down to the pilgrims kitchen and got us some drinks from the vending machine. A can of beer, tiny bottle of cava and two cans of fanta. Boy we know how to push the boat out.

I only got a maximum of 3 hours kip that night as the room above were dragging furniture around until about midnight and there was a snorer with the loudest one yet. Just before midnight I recorded this horrific snore and someone clapping trying to wake the culprit up. I sent it via I-message to the Angels and boys. Angel 1 and the Physiologist replied with astonished texts. At half four I was tearing my hair out. I had earplugs in my bag but ached so much I didn’t want to climb down and up again.