We left our room in Ages at 7.15am and although it was only going to be a 21km day I was flagging from the start. Not from lack of energy but from my feet. I do not have a high pain threshold and I am being tested to the limits. There was one climb soon into our day up to 1050m. They do live their stony uneven paths and you really have to watch where you put your feet as you could twist your ankle really easily.

We followed a group of three Spanish guys up the climb and half the way down it. One of them was talking furiously the whole way. Even I was amazed he did not shut up. Under normal circumstances we would have passed them on the way up but today I was slow. So by the time we were half way down and despite his warnings to be wary of the descent, the Cyclist steamed past them cursing their racquet and I was almost running trying to keep up.

Two separate Irish people had warned us of a split in the route today so once we crossed the motorway bridge most people carried on walking along the road. We turned left and again followed a stony path through fields and around the perimeter of Burgos airport. This was a tiny one and resembled a very early Spanish airport from when it’s European tourist trade began. The days of hey viva Espagna on top of the pops. Not that I’m old enough of course and nor would my father set foot in Spain. Which is kind of Ironic as my intention for this walk was in his honour.

We finally came to a road. A very busy main one and it wasn’t too long before both I and the Cyclist were saying that we recognised the road as he had cycled into Burgos some 20months ago. Walking into a city through industrial estates and downtrodden areas you would usually avoid like the plague, is very unpleasant. We have no car doors to lock. I have to say I really hate it. Guide books, the Camino forum and other Perigrinos say to catch a bus into the major cities. I have mentioned this s few times to the cyclist and the response is always the same. “We are walking to Santiago or we are not. The minute you take a taxi or bus then the walk is over”. So you can rest assured that there is no cheating going on however sensible it may seem.

I was looking forward to our stay tonight. I had gone into the internet last night and looked for a hotel. I was in need of a good sleep and some privacy. Plus there was a slight possibility we might give ourselves a rest day. It all depended on how I would be in the morning. I’m sure you agree that after our communal and sometimes prison like experiences, that our room was much more like it. The bathroom was as big as some of the dormitories we have stayed in.

We had a late lunch of a menu del Dia which filled me up. we both ate the same today which is unheard of because he would normally order something different so we weren’t having the same. We had Russian salad with crust bread, followed by chicken and chips, followed by Spanish tiramisu all washed with Vino tinto. €22 total cost for the both of us. So much so that I could not entertain the thoughts of eating again. As you can guess this did not please the ever hungry cyclist. We had a very small wander around but as I was supposed to resting we left and went back to the hotel. At reception I enquires about staying an extra night. I was thinking that it’s such a big hotel this wouldn’t be a problem. However she told me it was fully booked for rooms like ours. Had I been able to reserve our room again we would stay out tomorrow. Now I had to wait and see how I was in the morning.

While I wrote the previous blog, the went for a long soak in the bath. Now that was a huge luxury for him. Two washes in one day. I had washed my clothes in the scruba before we went out Ms had hung everything to dry on the towel rail over the bath. The cyclist had put his socks, The famous M&S trunks and his motorcycling compression leggings, into the sink to soak. Once we got back I rinsed everything and rung it out using the methods I had used when cycling. Basically, wring each until your hands hurt, then lay each item one at a time, on the towel then roll the towel so the item is like jam in a Swiss roll. Then wring the life out of it by the cyclist holing one end and me winding the other. The times I had to do this to wash and dry cycling kit so it was wearable the next morning. Our rooms looked like a Chinese laundry and today was no exception.

I hung things on hangers where ever I could but I knew both his and my socks would not dry by morning. Whatever decision is made about walking or staying, we will need to pack up and leave here. In the bathroom there was one of those cream coloured hairdryer units on the wall. I gave the socks a drying head start by putting the nozzle inside blowing hot air, down each sock in turn. All told 10 socks. Then hung them over things to finish drying. Hey presto.

Today’s blog/song title is dedicated to the cyclist who is strong of leg carrying all the extra load for a second day. 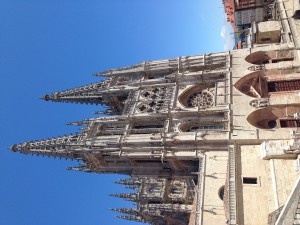 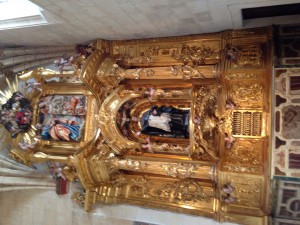 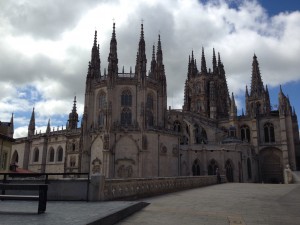