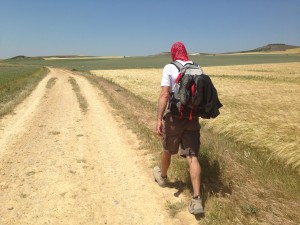 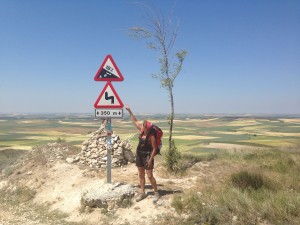 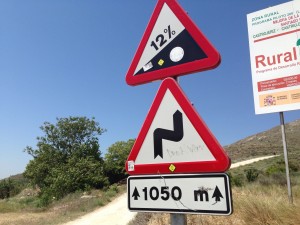 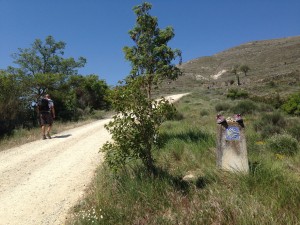 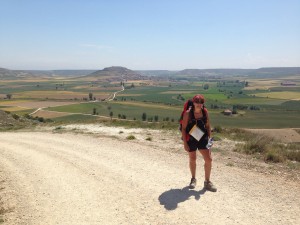 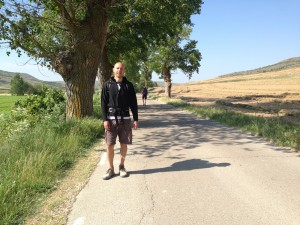 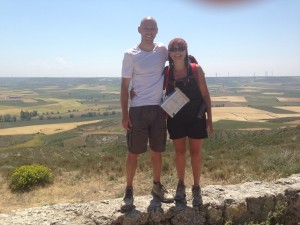 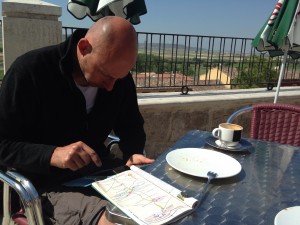 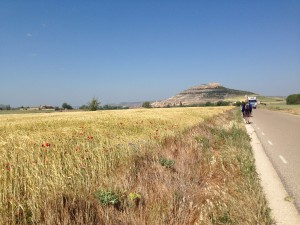 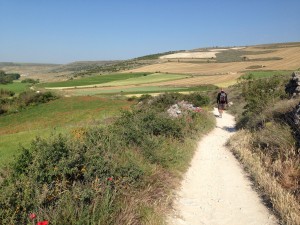 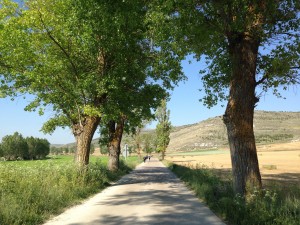 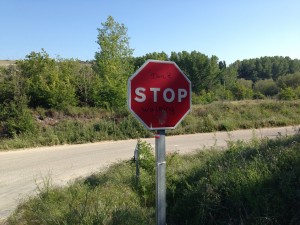 Wow it’s Friday. We have been walking for two weeks. My limbs are tired but fully functioning and only my feet are a concern. We still have three weeks to go at worst. 21 more days. Walking. If i feel like this now I have no idea how I will feel in another 14 or 21 days. However. We are making good progress so that we know we can rest up a week from now and have another rest day. The cyclist was completely revived after our day in Burgos and it did me good too.

Today I felt motivated and said that I would like to go further than the plan the Cyclist had set. It was another 21Km day and I didn’t want a replay of last night with the Cyclist playing caged tiger. He said he knows he set the plan but he doesn’t have to like it. Despite him telling me to stick to the plan, I kept saying I wanted to try go further.

We said we would get to our destination then see how I felt. I agree but knew that today I wanted to go for it. Our first town to go through was Honistas which is a medieval hamlet that hasn’t been modernised at all with new buildings. They have water and electricity but everything else is the same. This was where the French couple were last night and I was sorry I didn’t risk going the extra distance.

We arrived at our destination town which was built on a hillside and approached along a tree lined road. I loved that road as it reminded me of roads in France and following the Cyclist on one of his tours. One one of the photos here you can see the town in the distance top left of a photo with the back of the cyclist walking that road.

We walked all the way through the town looking for a coffee stop. We had passed the first right as you entered the town as I was sure there would be another. Luckily just before you left the town there was a bar. This one frequented by locals. Coffee and tortilla to fuel up for breakfast lunch as it was after midday. By then the cyclist didn’t question if we were staying here, it was a given we were carrying on. We sat outside and who should be sitting next to us with his large beer, but Herman. Who we had sat and had dinner with last night. He wasn’t joking about a beer in each town then. After this town there was a big climb, long plagues before a descent and long flat walk to the next town. No town in between. If we set off then there is no going back.

At the bottom of the climb I photographed the sign and then the Cyclist turned to me and said “I may have to see you at the top”. With that he turned, put his internal machine into overdrive and powered up the climb passing it here already on the way, like they were stood still. Me, being more the tortoise than the hare, just put one foot in front of the other and made my way up at my pace, which was still faster than most.

I looked back at the last town and took a picture as it stood lovely on its hill in the distance. At the top the view back was splendid and well worth the effort. You could see for miles with mountains covered in those huge windmills and the patchwork of fields in various greens and gold.

Now for the miles of plateau before descending. When we got to the end of the plateau, not only was the descent more steep but the view more spectacular. With the sun shining and clear views this is so much better than being wrapped up against the cold and wind with your head down. You could see our path in front for miles before it disappeared without yet coming to a town.

In the valley the wind was blowing across the fields and the green wheat and ripening corn were rippling with it. As far as the eye could see there were waves and ripples across the fields and I thought it looked lovely. The Cyclist was non plussed. I looked back to the large hill behind us, then caught up with the Cyclist making his way along the road to our stop town. The place I wanted to stay was a little privately run place where it was just private rooms. The cyclist got a spurt on into the town to overtake the Argentinian chap who had passed us before. Obviously I chivvied along behind and we headed straight for this place rather than stand deciding where to go. That was a good call as we had the last room. Hoorah. She also did a dinner for €9 each so we were going to be sorted.

We had seen a Japanese couple when we stopped for lunch who were also in our our stopping place last night. And we had passed them this morning with the lady saying “very fast, slow down” as we did. So I turned and said he was very fit then did a comical walk run showing how I have to catch up to him. They thought this was hilarious and shouted “run run”. This had got the Cyclist to thinking about speaking Japanese again and the walk over the mountain had given him time to drag some phrases back which he began to teach me. Things like, I am English, my name is, good morning and others. Once I had the pronunciation right I recorded them on my phone. Next time I saw them I would speak Japanese. And I did. We went for a drink at the hostel bar and they were staying there. They lived this effort to communicate their language and I had done google translate in my phone saying that the cyclist had worked in Tokyo for ten years etc. the lady was very pleased and would tell her husband who was sat writing his journal. It must be hard with nobody speaking your language. We don’t speak Spanish but there are enough English people passing through for years, that the locals have picked some up. It has made me more resolute to further improve my French before our big vacation next year. I can get by and converse in French but I want to get much better. Cue my Michel Thomas CDs for advanced, when I get home. I have 12 months before a 6week stay in a huge 4bed villa in Provence. But that’s next year, although the thought of it is helping me get through this.

Dinner, wasn’t great and was communal with a hostess that only spoke Spanish, an Italian man with a lot less than pigeon English, a French couple who only spoke French and us. So that was minimal table discussion then. Haha.