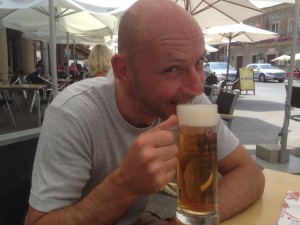 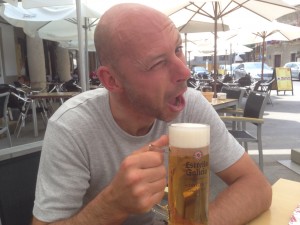 Monday and today the Cyclist will arrive. I had had to take a pill again to help me sleep. Not only was it like an oven with no air in the room, but I do not sleep when we are apart and I don’t function without sleep. It’s always been the same. It was late when I woke but as it was after 1.30am when I gave up trying to sleep and took the pill, I am not surprised.

After getting ready I decided to wait at the B&B for the cyclist as I knew the owner locks the door and so I needed to be around to let him in. So I took a chair from the room and placed it on the narrow balcony that was only just wide enough and there I sat. I wrote my blog, text and email from 9.30am until after midday waiting. Until eventually I heard his voice calling my name. That was odd as I knew the Camino road went past this place from left to right across its frontage and every with movement below I had looked to see if it was him. As embarrassing as it is it was like a Lassie film where lassie just sits and waits for the owner to return. But nobody had walked past so how come I could hear him. A bit more hello-ing to and from and he appeared around the left corner of the building liking as spritely as ever. Not like a chap who just walked 50 miles over 3 mountains.

I let him in and as normal he said to hurry up he wanted to go and eat lunch. He was famished. For such a slight one he can sure put it away though he would never admit it. I guess all machines need oiling!

In the square over lunch we caught up on each other’s day yesterday and this morning and looking at photos. The Cyclist did partake of three beers and more than half a bottle of Vino Tinto and deserved every bit I think.

The Cyclist said he had spoken to only three people today. One was a dutch guy very early this morning and who started to speak rather than the other way round, as you might expect. After 10km though he told the Cyclist he walked too fast and he was going to have to stop, so he fell behind. A long time after he saw an American lad who we had seen with a group leaving Leon and then again walking to Astorga. The Cyclist Said he was walking way too slow so he had to leave him and march on. This was only about an hour from Villafranca and he said who should he pass next but Jan, the chap from Denmark. He was also walking slowly and had a swollen ankle. He thought the Cyclist was mad covering the mileage he had to overtake him when he/Jan had had a days head start. He was asking after me though which was kind of him. We hoped to see Jan in the square that day but there was no sign of him. The Cyclist said Jan looked very weary and even more tired than when we had seen him in Leon some days ago. He is staying in Albergue’s and is finding it hard to sleep as we know only too well. Poor Jan. I really feel for him.

The Cyclist also said he had been thinking about my blog while he walked and was coming up with song titles like I am using. He burst into song singing Reunited and said he’d thought that would be good for today’s title and he also suggested one for Wednesday. Which I will save until Wednesday. Flipping hell. Reunited by Peaches and Herb. I had my first slow dance at a school disco to that song with a lad called Sean Lampit. Ha ha. I’m not a fan of it now, but to honour my husband as he suggested it, today’s title is Reunited.

It was absolutely roasting in the square and by 3pm I could hardly stand it as those wonderful feet of mine were swollen like balloons again. We needed to decide what to do tomorrow. Was I going to try to walk again ( the Cyclist was sceptical as he had watched go down the stairs from our room slowly and like I could hardly walk)? Or was I going to catch a bus forward again to make sure I had the best chance to heal and continue on to Santiago. All this depended on buses and where they went to. The Cyclist went to see if the Tourist Information (TI), was open. It wasn’t open again until 4pm until 6pm. He said there was a sign with the time and temperature by the TI and it said it was 38degrees. That didn’t surprise me as it felt really hot under the parasol. He went back to take a photo but it had dropped to 37. Even so that is still hot for late afternoon. So to get out of the heat we headed back to the room so he could shower and rest a little.

At 5pm we had to go back to the TI office to find out about buses so we could discuss tomorrow and make decisions. The clouds had gathered and it had rained making the temperature cooler. When we got to the TI, the temperature was at 19 degrees and the storm clouds were gathering. There was no bus to Tricestella but I could get a bus to Sarria. I would have to go North west to Lugo, then catch another bus south to Sarria. I would be crossing counties so there was different bus companies. If I wanted to go tomorrow I had to buy a bus ticket from the tobacco shop in the town. I could catch a bus at 5.30am or 12.20pm or 7pm.

The Cyclist could walk to Sarria and get there Wednesday morning as the distance was less than he had just covered. From there we would carry on together on foot. At the tobacco shop the owner gave me the options of 5.20 in ze night or 12.20 in ze morning. Funny that. The Spanish are on a different time zone to us. They don’t surface in a morning until after 10am. They close all shops for 2-3 hour anytime from 2pm to 6pm (all towns are different) and they only begin to go out at night about 9pm eating their dinner around 10pm. So to them 5am is the night and 20minutes past midday is still the morning. So for them I must go to bed normally late afternoon and start work in ze night. (I do know I said “ze” as its how he pronounced it).

After a quick dash into the Dia supermarket to get supplies for the cyclist and some fizz for me, we headed back to our room to the sound of thunder. The Cyclist got his stuff ready for the morning and then lay down watching a movie with my earphones in quickly dozing off. He woke chuckling saying that he was watching daft movie. I think his subconscious was listening to it as he dozed. He was still chuckling so I asked what it was. He said it was called ‘Spy’ and it had Miranda Hart in it playing Miranda Hart. Also that American actress who starred with Jason Bateman in ‘Identity Thief’ called Melissa McCarthy.
Lights out now as he wants another early start in the morning.