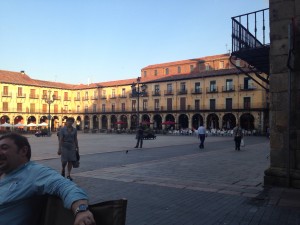 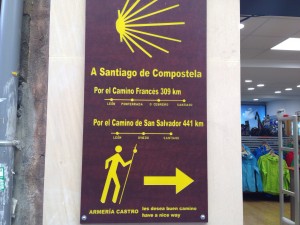 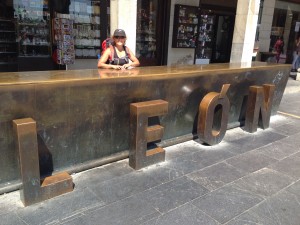 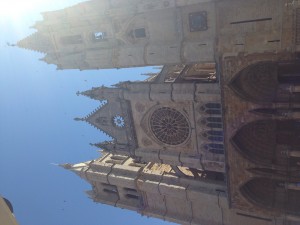 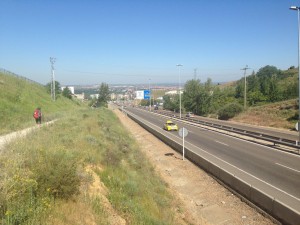 After such a mammoth walk yesterday I expected really aching legs and muscle stiffness. Surprisingly my legs were ok and the only thing sore was that dreaded flipping blister. That was a killer and extremely sore to try to walk on. Still we had to walk so my socks and shoes were left off until the moment we were leaving. We only had a short day today of 18.5km and had already considered stopping two nights in Leon depending on how I could walk with the blister. Once again we had no breakfast as such but we shared half a banana each that was left from the picnic yesterday.

Most of today was going to be beside main roads leading into the city. The first town was 6km away and that was where we may get coffee as a last stop before lunch in Leon. That was one of the longest 6km I have walked. Not because of the distance but because of the pain. I tried really hard to walk normally but I know I was compensating for not being able to put my foot down properly on the left and my right calf began to hurt together with my foot. L

When we stopped at the cafes got us a croissant to share and we sat at a pavement table as needed to take my right shoe and sock off. Oh s**t. As if it wasn’t going to be outdone by the attention the left was getting, it had developed a huge blister in exactly the same place. Damn damn damn. No wonder it was stinging like hell and we still had about 13km to get to the cathedral square. I doubled up the compede in a cross shape hoping it would help and put my shoe and sock back on.

Trying to walk normally but not putting your heels down is quite a strain on your calf muscles and you don’t walk quickly. I did my best and on we went vine sooner we got there the sooner I could remove my shoes and socks. The Cyclist said we should go slowly but I did everything I could and went as fast as I could, which was much slower than normal. Before long he suggested I speak to Angel 1, to see if she could find us a hotel for two nights. It was obvious I wasn’t going anywhere and once I had stopped for lunch when we got there that would be it.

There was a series of inclines between the last built up area and each time we walked up one I was hoping to see the city as it couldn’t come soon enough. For about three inclined each time I got to the top all you could see was the descent and I other up. Today even the Cyclist said his ankle was hurting and had joined me in the ibuprofen club so he wanted to get there too. He was not so worried about immediate issue, more if it had a prolonged effect that may impact his cycling and Cyclocross season.

The sight of Leon on the brow of the last hill gave us some relief to know we were a little closer. As walks into cities go, this one was better than Pamplona and definitely better that Burgos. Once through the newer part of the city we went through the walls of the old roman town and into the very narrow streets so small they you can practically touch both sides at once. Finally we come onto the wider street leading up to the Cathedral. We walked up and I got Kyle to pose with an Elvis outside a shop. He said it was the Kings of Leon, which I thought was very witty and it makes me chuckle even now. The next shop was a shoe shop and I had to have a look. It is Spain after all and they do lively shoes like italy. I spotted a lovely pair of sandals and took a photo. I knew my sister (Blondie) would like to see them too. The Cyclist said “well you’ve got a smile for the first time today and it’s because you are looking at shoes”. And his point is? Ha ha. Of course I know his point but after 2.5 weeks of these shoes and socks with unflattering shorts, the thought of a beautiful pair of sparkly sandals was lovely.

After a few initial cathedral photos it was back down that street to eat at one of the restaurants with pavement tables we had passed. Finally we sat and I couldn’t get my shoes off and my flip flops on quick enough. Ouch ouch ouch. Another blister on a toe and loss of my ankle bones from the swelling. Angel 1 called back and she had used my log in details to get into my booking.com account to find possible hotels. She had already looked and discarded ones she didn’t like. The first she described sounded good as was next to the Cathedral. Not cheap but not bank breaking. Then we said we were sat opposite a hotel that looked quite nice and told her the name. This was the other one she had chosen. After describing this hotel the difference was that use of the spa in the one opposite was extra rather than included. Well we weren’t about to be using the spa so we said to book that one. How great. No looking for which street it was on we were already there. Fan-bloody-tastic.

We finished our lunch and didn’t move as the sun was beating down and we were just too tired to move just yet. I got the Cyclist a beer and took a photo of the glass. You can see the photo which the Cyclist photo bombed. The glass was a Harley glass and it made me think of my wonderful dad and his love of all things Harley. If it wasn’t for him I wouldn’t be walking this Camino. A tear or two later Jan the Danish guy walked past. We waved and he came over and sat down. We had already seen Gerrard and Sylvie walk past and had a quick chat. They had got the bus in and were not in an Albergue tonight. They were here for one night then moving 6km on to the edge of the city tomorrow to get a head start on Friday. Plus Sylvie said there was a market there tomorrow. I’ve wanted to see a market but I have no intention of doing a round trip of 6km to see one. I have enough walking to do. Jan looked as wiped as I felt and he said he had stayed in that Albergue in Religios. If you remember we walked 22.7 yesterday because I couldn’t face an Albergue. He said it was really grim and he had no sleep. Plus the today that meant he had four miles more than us to get him here. He sat with us for about an hour and showed no sign of moving so understanding that this takes it out of you, I went inside and bought him a beer. We sat there with Jan until about 4.30pm when we knew we should really go across the road and check in. Jan wasn’t staying, but moving on tomorrow as he wants to continue from Santiago for the extra three days it takes to get to Finistere. He gave me his email address so I could mail him the photo of us all together from a couple of nights ago and we bid him farewell. We will get in touch in a week or so as we get near to Santiago as we would all like one last drink or meal together before we all go our separate ways and back to our home countries.

There are three beds in our room and I felt so sorry for Jan in another horrid Albergue that I nearly called him to take the other bed for the night. While the Cyclist was showering I had a text from Blondie. She was just showing concern for the difficulties this adventure is throwing at me. I gave her a call and we had a long chat. It was lovely to know she was caring and hopefully she understands why we carry on with this quest. We talked shoe photos too and the poppy photos as she is an artist so loves to paint those type of scenes. Thank you sis for your concern. It was really nice to speak to you.
We went for a wander for an hour at 7.30pm and found lots of little streets and two squares with bars and restaurants. It was bustling with Spanish and we sat and had a drink. I had my first every Daquari and it was lovely.

TODAYS BLOG TITLE IS DEDICATED TO MY ANGEL 1, WHO IS AN ANGEL DAUGHTER WHO ONCE AGAIN HELPED HER MOM OUT WHEN I NEEDED HELP. Thank you. Xx