Sun is Shining – Bob Marley and the Wailers 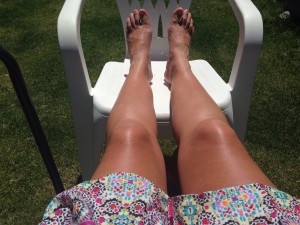 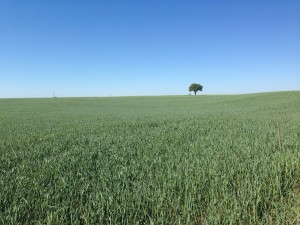 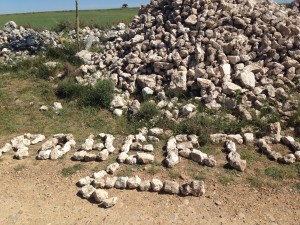 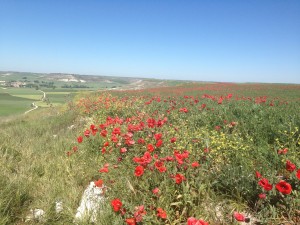 The sun is shining   Hoorah

I forgot to update you on the progress of the lust of irritating things that the cyclist had been compiling. I 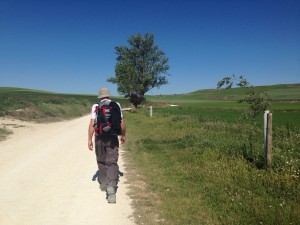 had asked him about it and he said he hadn’t added to it for a few days which shows that over all he had been content with the food and room for a few nights.

We left Burgos at 8am and followed the river a short way to the bridge where the pilgrim trail crossed. I didn’t expect to see many others with back packs as we were so late, but the Cyclist had said that it was pointless setting off early when we only had just less that 13miles

to go as we would arrive early.

There were a few crossing the bridge the same time as U.S. One group was 4 American women. How do we know this. Well one pointed out something to another, to which the other said in the loudest southern drawl possible “Oh myyyyy Goddddd”. The Cyclist, clearly horrified at the thought of having to listen to their babble for miles, suddenly got a sprint on.

It was quite cool to start with but the sky looked like it would warm up and so it did. By late morning the sky was a lovely blue that contrasted dramatically with the fields of green. Edged by red poppies and other blue or purple flowers , it looked quite striking. There were a couple of climbs, one of which was 5km long and went gently up for what felt like ages. Rather than the Pyrenees though, these flatten at the top to huge long plateaus before eventually descending down the other side. At the top the Cyclist saw a name made by stones and said his dad had been there to show us the way.

We arrived in the planned town around midday. He asked me what I wanted to do. Stay or walk on another 8.5km. I was in a real quandary as my heart said walk but my head said to be aware of doing too much as I had been on my last legs and was still trying to recover.

My head won and I told the cyclist that he had made a plan to help me so we would stick by it. Could o have walked on? We will never know. I do know that I could feel that days walk in my feet. The first Albergue I asked at only had one bunk bed left so we couldn’t stay. The next one, and only other one without going to the municipal which the cyclist would flatly refuse, was a newish one. They had space and we took bunks in a room of ten. Other people were walking on through but the decision to stick to plan had been made and here we were. We both had showered and when we were finished our room was full. Not only do I massively dislike communal sleeping, I also dislike communal shower toilet facilities. This Albergue had 5 rooms of ten upstairs, rooms downstairs and a room with two toilets and two showers in the same room to be shared. One men one women. Having a shower and having some stranger blow their bowels a foot away on the next cubicle is not for the faint hearted. On the last Albergue the night before Burgos, it was totally communal. Cleaning your teeth to that on the morning would turn anyone’s stomach.

I wish I would have ignored the plan and walked on as stopping early in these places drives the cyclist nuts. What made it worse was the wifi was more miss than hit and he was trying to work as a client had contacted him. He was really cross and luckily Angel 1 agreed to help fix the situation by fetching the lap top when she fed our fish and the Halo King would be coached by the cyclist on what to do so he could fix the problem. Hoorah. That worked.

For dinner we went to the local bar that did a pilgrim menu. We were told to sit at a table where a chap was already sitting. Ok there were 4 chairs at each table, but there were two empty tables. Flip me if we weren’t having to sit and eat with strangers again. I know this is the part other pilgrims love but maybe they aren’t raging introverts.

Soon after the hostess directed a lady on her own to make the table full. She was Spanish and spoke practically no English. The other guy was German and unusually fir them, he hardly spoke much English. He had a stock phrase that was repeated with most sentenced. “Das ist beautiful”. This was applied to the fact he was encountering lots of people from lots of countries. “It’s so beautiful I meet people from Brazil, France, Korea, Japan, South Africa, Australia, America, Canada, Argentina ya it’s very beautiful. And now we are at table together it’s very beautiful”

Bless him, he was obviously revelling in his experience and his beer as he was saying he stops for beer and coffee at each town. The Cyclist enjoyed his meal which calmed him down somewhat and he even starts trying to talk football with the German guy, who he referred to after as Herman, obviously!

The people in our dorm were the noisiest yet. Not from snoring but before they even got into bed. They would come and go, mooching in their bags with the rusting sound of bags, drop stuff with a clatter on the hard floor, slam locker doors open then again and go back to their bag as they had forgot something. This went on from 8-10pm and the cyclist was getting fraught. I gave him a sleeping pill. It did the trick.