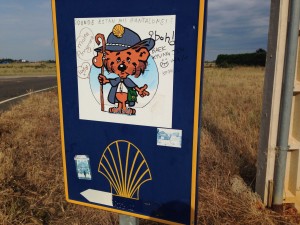 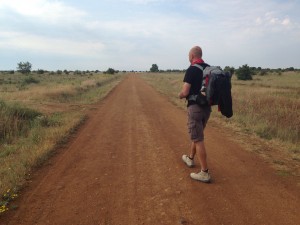 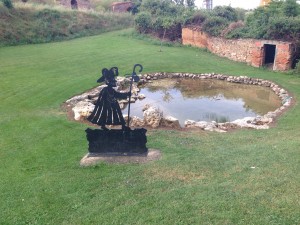 Sunshine after the rain

I wanted to set an alarm to get us up early this morning but the Cyclist had said not to and wake up naturally. Lovely as this was, it was after7am when I did wake and this meant a later start than I would have liked. Especially as I knew I was not going to be fast today because my blisters were no better and it was still painful to stand.

The first 6/7 Km were just getting out of the city and through a suburb. Then we had the choice of main roadside walking or most off road and quiet country roads. I knew the cyclist didn’t want to do the roadside walk even though it was a little shorter in distance so we veered right and off the highway. I hate to admit it, but a lot of the first couple of hours I was upset as the pain was almost unbearable. Not a trickle but sobs as the constant pain had begun to ware me down and each day the damage was worse than than when I had started. We stopped so we could take the ibuprofen and this time I had two co co-codamol too.

We walked through a village up a hill and onto a red dirt track that the Cyclist said was just like the road out to the bush when leaving the Barossa Valley in Australia. This was one of those tracks that goes on into the distance and no matter how long you walk forwards there still seems no end in sight. I was trying really hard to walk normally but I knew I wasn’t. Even though my left heel looked slot better this morning, I could feel that it was back to square one.

The cyclist was counting down about how long we would still need to be walking by calculating using gone average walking speed we have been doing. We eventually came upon the town where we thought we would have to stop. He had said that if it took 3 days to get to Astorga instead of the published two days, then that’s what it would take. But to do it in two days then one of them had to be a 20mile day.

There was only an Albergue in this village so I said that we should keep moving. After checking if I was sure we carried on without stopping. We had started late and now we were about to move more forward that the majority and as the next place some 10km away, only had one place with a few beds we had to move. I did not want to grit my teeth and keep moving only to be told there is no room and have to go another 5km along. That would finish me off. The Cyclist said for me to keep moving on while he went into the shop to get fluids as it was very humid and hot and I had already drank over a litre of fluid. For me that’s unheard of.

I began to walk with a girl who had been at one of the communal dinners we had at a place before Burgos. We had passed her a number of times since and said hello but had never really spoken. I now had the opportunity to do so as she was sat on the kerb putting plasters on her feet where she had previously had a blister. It was her that had told me to try the Betodine to dry them out. She had bought a needle with syringe to suck any fluid out of blisters and had tried injecting the Betodine fluid back in. I wondered about keeping the needle clean but it can’t be any worse than me jabbing the same safety pin in to mine day after day.

Along the way we had a mutual “really you don’t look that age” chat. She was amazed I was a grandmother and was among my age and she looks in her late twenties but is 39. Never married and no kids. She is a career girl. Her name is Judith (pronounced you-dit) and she is Hungarian. Interestingly she quit her job earlier this year to do the Camino to find meaning and have a four month break before looking for another job. She has been a project manager for innovation technology for 20years. Nothing to do with IT but for new materials to improve or replace existing ones. The job she quit was working for the EU commission in Brussels. She was managing a multi million dollar project to source materials that are used in the composition of computers/chips. She said that currently the material is sourced from China, but they have cottoned on and have been doubling the price and with holding supplies which apparently caused big issues two years ago and so her project was born. They are trying to find sources of the material in Africa and by re opening mines in European countries including the UK to look for it. Obviously our mines were looking for coal for example but not for this particular mineral. Well now they are. Her job was to ensure all regulations and policies were adhered to as well as ensuring they didn’t overspend. I told her to look on Gov.uk for jobs. While some jobs are restricted to UK people some aren’t.

Talking to Judith passed some time and helped me not to focus on the pain in my feet. The Cyclist had come storming past us some time before and was well in front now. When Judith stopped to have a roadside toilet stop, I walked in to catch him up. Where the dirt track crossed a road he waited for me. 4Km to go he said. Oh god. When you are on your last legs (or feet) that sounds an awful long way.

He took the cherries out of my pack and we shared them as we walked. Eventually we saw some roofs up ahead and glad as I was I knew there was still 2km to go as we now have a pretty good judgement to the distance away of places based on the map and time to walk it. I dragged myself along the track and into the village. Right as we entered it there was an Albergue. I told the cyclist I didn’t really want an Albergue as I was wiped but he said that it had some private rooms. I went in and they had one room left at €40. Yes. I will take it. Along the passageway in the courtyard, who should be taking their shoes off but Gerrard and Sylvie. They had stayed 6km ahead of where we started this morning and they had just arrived. “See” the Cyclist said, “I told you we would keep bumping into people”. I like the French couple and we have been bumping into them regularly since the very first night with those 10 rowdy Spanish women. Remember? I wonder what happened to them after we last saw them?

I was really pleased. Judith walked in about 20 minutes later and took a bed in the communal room. We all said we would eat there as apart from here there was nothing (I mean nothing) here. I had a shower and tended to my now bigger blisters together with a new one.

Judith and another guy who spoke English and French well, joined us for dinner. It was quite nice and where the French/English got too difficult, the other guy translated. Good job as somehow we got into talking about our fish tank and how we had a blue lobster that used to shred its skin then eat it. Gerrard said they had also seen a guy who was walking the Camino in the opposite direction and was pushing his things in his wheelbarrow. He said the Cyclist should get one and tie it to his waist so I could sit in and be pulled up the mountains. What a good idea!