a long walk he said

Yesterday we saw Gerrard and Sylvie for a fleeting moment as we put our boots on to leave. We had said no to paying for breakfast as The Cyclist is sick of the rubbish being served for what is supposed to be the most important meal of the day. Mud, before we came he told me that going out early and exercising for 2/3 hours without breakfast would make my body burn fat for fuel and then we should eat something. This is one of his proven methods when he decides to lose weight for cycling. I don’t care I will give anything a go.

I was in the dog house still as our dinner after our long walk was a piece of baguette with a thin slice of omelette in. His demeanour was a cool and grey as the temperature and clouds. We were only walking 15 miles today. Ha! Hark at me! Only 15 miles, as if it’s a breeze. I had got two bananas and two flat peaches (he loves but you don’t often see at home) U.S. Some cereal bars from the supermarket and they were going to have to sustain us until we got to Logrono which is a big city.

We were on the outskirts of the city where industrial areas were but the signs said 4Km to the city. These are the times when the Camino drags for me as I really wanted to sit and have a breakfast coffee. We walked into the city via the d and famous bridge. I do like a bridge photo. And this one didn’t let me down. The old part of the city was tiny winding streets that was a labyrinth. I am glad to have the support of the Cyclist as he walks on ahead a bit and avidly looks for the way markings so we stay on track. I sometimes miss them as I’m staring at the path and my feet just pounding away. In one of the streets he spotted a wall that had been painted up which was quite impressive.

On our was out of the city we finally stopped for that much yearned for coffee. I had one of those bits of baguette with omelette in it as I didn’t want to flag after yesterday’s dinner disaster. In fact I was quite determined so I ordered another as I was being told I must eat and make it sensible. Two coffee and baguette later off we went again.

We arrived at our destination at midday and although I could feel the walk I asked about going on one town further 7km away. He said we should stop as I had done a long day yesterday and not to push it too hard in the first couple of weeks. That’s quite funny as although we may not always cover a great mileage compared to a car, however it is walked at great speed compared to all the other Perigrinos.

I had checked my pdf lists of places to stay and there was a private albergue that had a washing machine and dryer plus wifi. And the possibility of a more private room if we were lucky. What I didn’t tell you was that The Cyclist was the only male in a dormitory with 7 women. This would be so bad as he had hung both our towels to act as a screen so he couldn’t be seen. What did add to the grumpiness earlier today was he told me he had not had one ounce of sleep. That ALL night one, two and sometimes all women were snoring like tractor engines. I had head the d French ladies myself and was determined to try to clear my name as a culprit but he was having none of it.

This was a tiny play ace and the owner checked us in. Luckily he did have a private room and it was €25 instead of us paying €16 to be in bunks in a dorm of 20. Result. We still had to share the facilities however we had a single bed each and privacy.

Once quickly showered we went in search of some lunch. I spotted a pilgrim menu outside a hotel and said it was good for me. That was sorted then. Wow. I did not expect to be sat in such a nice place and we were the only ones there. The waiter was very wasn’t which was a real first too. The Cyclist really enjoyed his main course of Swordfish and once we had had our dessert he was back to his old self again.

We walked up to the church as the Albergue owner told us it was worth seeing. The sun was out and there was no wind so a little wander wouldn’t hurt. The inside of the church was truly splendid. These was a little box that turned the lights on for a few minutes if you put on a euro. It was out of action and it was such a huge shame as the gold all around the alter area would have gleamed. The photos do it no justice therefore.

We were looking for a place to sit and have a drink in the sun. There was a bar in the square however it was quite busy and very noisy outside so I directed is back to the little terrace bar of the hotel. Again a result. It was a sun trap with no wind and we were the only ones. I guess people are put off with it being a smart hotel. The Cuclust had 3 large beers and I two sangrias while we rested and chewed the fat. He also phoned Mrs Chimney to check on her. I tried to Skype from the kindle as I couldn’t get the wifi signal for some reason. Nobody answered so that was that.

Even though we had had lunch we had booked in for pesto pasta with salad offered by the owner. It wasn’t a lot but I knew I wanted to do a long 20 mile day tomorrow so we needed to eat up. I feel like a fatted calf these last few days. After the dinner the boys and girls separated to opposite ends of the table. The Cyclist having had lots of food, topped by beers and red wine must have found his jaw oiled as he became unusually sociable. The other guys were two young Danes that were obviously well educated and worldly wise. Younger than my Angels I’m sure. While they discussed politics of Denmark compared to UK etc, the ladies discussed reasons for doing the Camino, children, marriages etc. there were 4 of us. Two German and one Swiss lady. She said she walked out of her house in Geneva, shut the front door and just began walking. She walked through France to SJPP and was now well on the way to Santiago. From the way she hobbled along leaning from one side to the other to shift forward, it was a believable story.

Tomorrow it is Eurovision Song Contest. I hear your groans but as you know I LOVE it. So I booked us into a pension so we have our own room, double bed, bathroom and TB in the room. Thank you booking.com. More money but worth it. This is my motivation to get me all the way tomorrow. Fingers crossed. 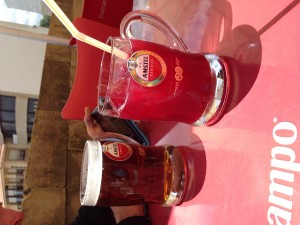 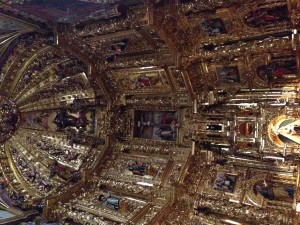 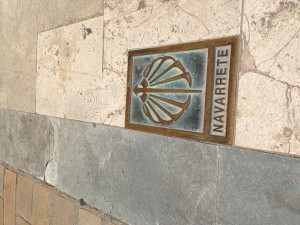 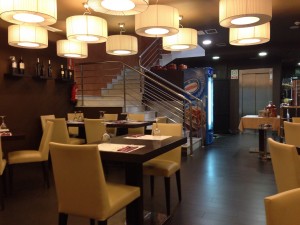 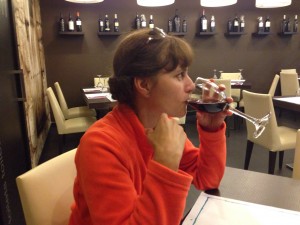 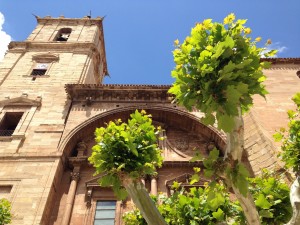 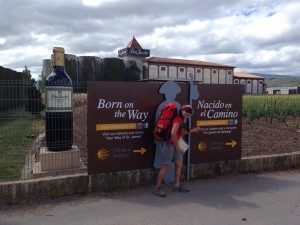 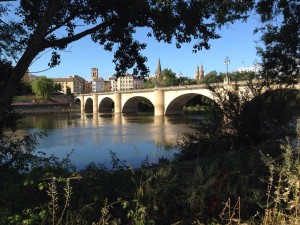 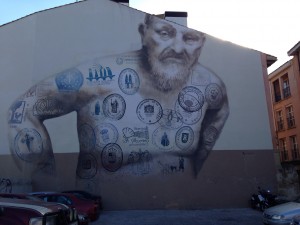