The last day into Madrid. Stage 21

Well this is it. Today is the last stage of any cycling tour that The Cyclist and I will do, so he says. This one has taken it out of him. Not jst the Vuelta but the two before it. Italy was hard as he also used it to get to peak form. Le Tour […]

Home safe and sound and back to normality

Well, we got home safely as most of you know. It was a long journey on the Monday arriving home at 11pm which makes my achievement of being sat at my desk in Telford at 7.30am amazing in my book. As The Boss had warned me, I didn’t have time to catch a breath as there was a list of things to do waiting for me. If I start about deadlines then it will get boring, so I won’t.

Lots of my colleagues asked if I had a nice holiday. When I spoke with CBR Princess today I told her that if anyone else asks me if I enjoyed my holiday I would explode. That is not exactly what I said but you know what I mean. While on the subject I must say congratulations to her for getting a promotion today. What a way to start a holiday.

Giro Stage 21: The last push and then the long drive home 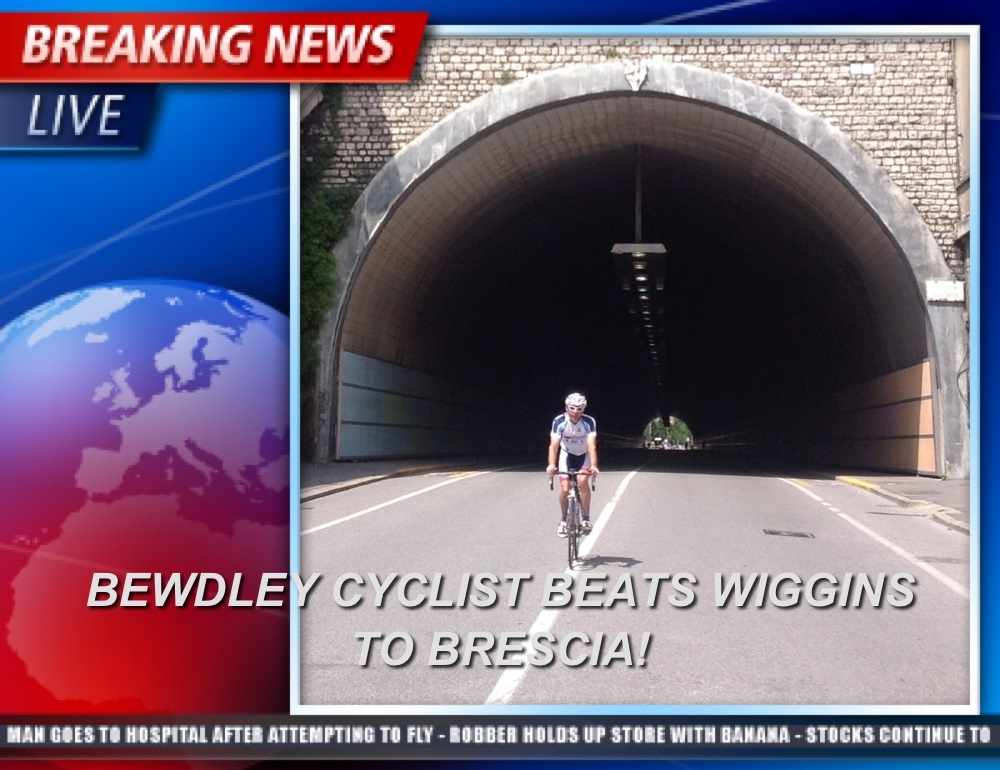 The cyclist had said not to set the alarm but it doesn’t matter as our body clocks wake us up anyway. It’s an odd feeling this morning for me. I was tired but I knew we had to get on our way. It was part anticipation for the cyclist as this was the last stage and he had survived it. Well, we both had so far. Part thoughts of heading home and getting in my own bed on Monday night. Ahhhh.

Giro Stage 20: One man, one insufficient bicycle and 5 whopping great mountains in every possible weather 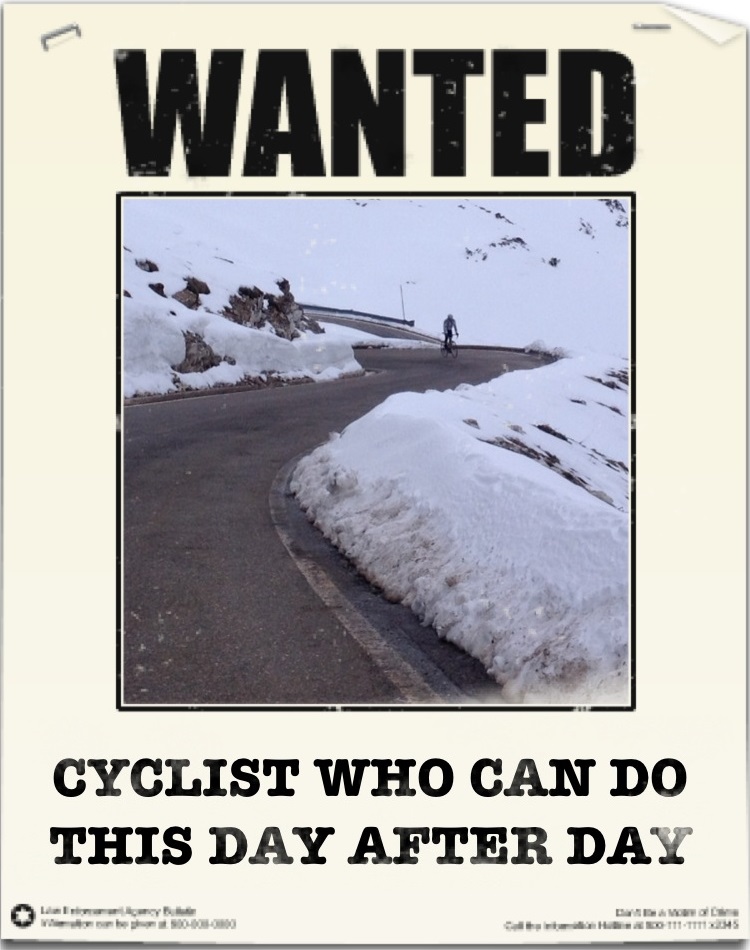 Today the cyclist was adamant to set off early as he was expecting 10 hours in the saddle. In fact our journey from the start to the finish was 11.5 hours taking in the puncture very early on and the two sandwich stops so he could refuel. Also there were the minutes taken by putting on or taking off extra layers depending on the sun, snow, climbing or descending. In each case I have layers ready and have warmed them by putting the heater on full for the footwells and strategically placing clothes and shoes so they are dried or warmed.

Giro Stage 19: The stage that never was 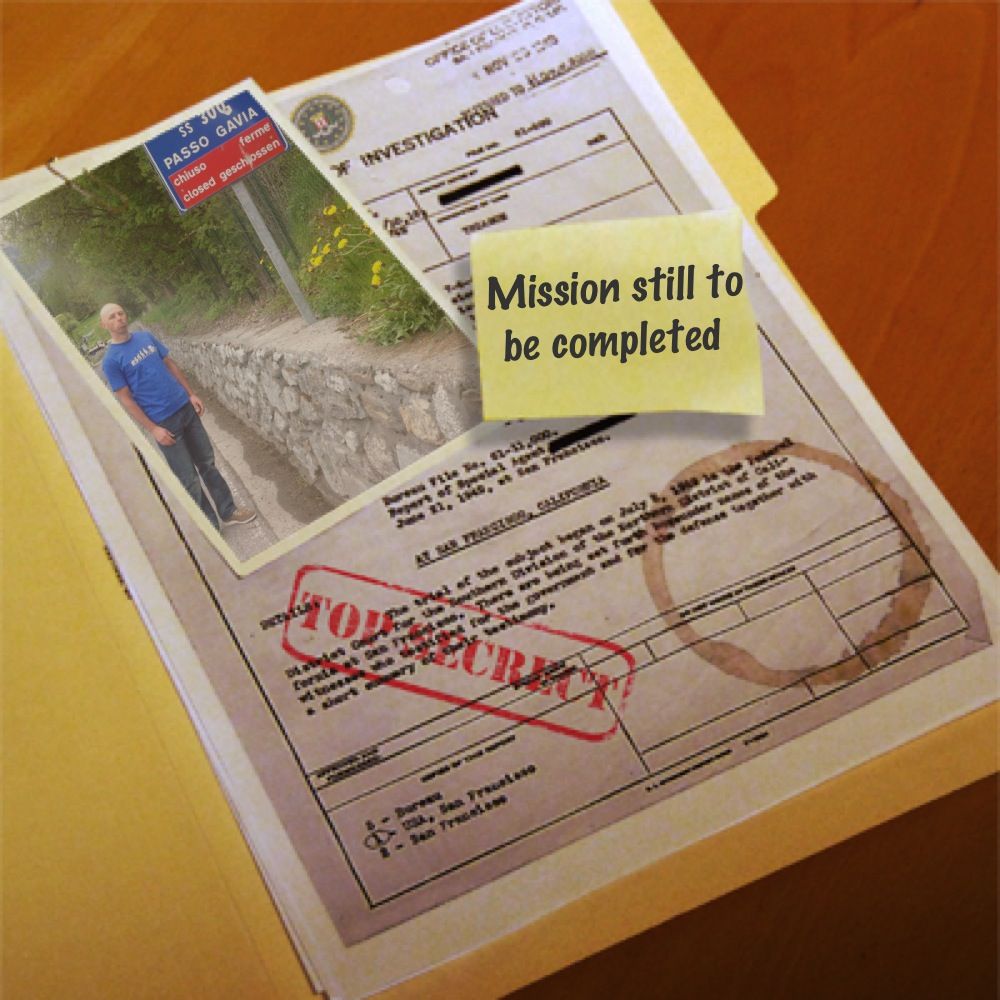 The Gavia and Stelvio closed. That is the headline. I will include pictures so you can see why. The snow at the top of the Gavia is 6 meters deep and the Stelvio is unclearable as it keeps snowing so they aren’t going to clear them now until they are sure that the snow has stopped for the summer. We are in a ski town called Ponte di Legno where stage starts today there is no cycling. The guy at the hotel assures us that this time last year the temperature was 26 degrees. While now it gets to about 10 and drops below freezing each night.

Giro Stage 18: Someone once said the Grand Canyon was a hole in the ground with different viewpoints

Today was a time trial but up a steep mountain. Now, in Le Tour the time trials are flat and fast. The idea is to see how fast you can go. Well a mountain time trial is a bit unfair for the likes of @markcavendish who finds mountains very hard. Any way this is not the Tour, it is the Giro and everything they do is harder, steeper and more complicated than the Tour. At least the cyclists legs should be good to go when we get to France. And he will be grateful to the Masseuse for his first 3 days as she will be with him not me. She will, I expect, see that his legs are rubbed far better than I have managed on this tour. In that particular role I have let him down. It hasn’t been that I haven’t wanted to. It’s just that the rides are so long and the transfers so long that by the time we get in and have done the essentials we both fall asleep.

Giro Stage 17: A day of wind and traffic islands; and it was all going so well too

Today as we started it was grey and blowy. We had a short drive to the start, around a cathedral sized church and a beautiful tree lined road to end up on a side road of an industrial estate. The cyclist offered to retrace our steps for a photo on the tree lined street, but it was 9.30am and as much as it would have been nice, I had heard his warnings of the length of today’s ride in my head. So off we went from somewhere not on the true Giro start but near it. It was a very gusting wind and was blowing for the first third of the ride, even blowing the cyclist across to the other side of the road at times it was so strong. Awful actually.

Alarm set early and two alarms. Up and get sorted as quickly as possible striping the bed while the cyclist swept floors. Diving away at 7.15 so nt bad. Set off from Valoire at 8.10 heading for col du montcenise. Ooh clouds coming in. The last thing we need day is the rain that is […]

The cyclist let me sleep in this morning until I woke at 8.30am. Lovely. It took me ages to prise him off the lap top, midday in fact, so that we could head down the mountain to search for lunch and a supermarket for a re-stock. While he did his website stuff I checked us […]