And the icy rain began…

At 11.30pm I was woken last night with the door banging downstairs and all stuff being cleared up from the kitchen area. In fact the clattering and banging of doors went on for over half an hour. At the time I thought just you wait until early morning and I will repay the complement. It was my turn to be poorly after that. The cyclist had been up a few nights before and now I was up all night from 1.30am not well at all. i was feeling quite unwell and was lay on my side pondering how I could do the 150mile drive ahead of us being the way I was. I had Not eaten harly anything so I really don’t know why.

A bit like tonight really. I have two small pieces of bread with some cheese and salami. Oh and a few crisps. We wre late in after the long ride and the cyclist ate the tuna sweet corn rice that I had prepared last night and chilled for such an eventuality. I had popped in to get him Pringles and some chocolate blamange too as there are times when he does this that he craves things he may not normally eat. As his Gamin had calculated he had burned 10,000 today with his ride (let alone fighting wind and icy rain for 50miles of it), quite frankly I don’t care as long as he eats. I also re stocked his fresh fruit today so we are all good for porridge in the morning if I get up as soon as the alarm goes off and go to the car to fetch the gas cooker.

It was absolutely freezing in the pouring rain. i was torn apart watching him battling along knowing that he suffers from very poor circulation and he would be in a lot of pain from the cold. this was confirmed when I saw him keep shacking one hand vigorously then the other and back again. Poor cyclist. I pulled up beside him keeping to his speed to see if he was ok. He had his mouth open, he red faced and rain was pouring from his nose. His expression. Was one of a pained determination.

At 55km we stopped so he could get a short warm and some food. He is soaked through. Then off he goes at 10.53am and still 200km to go. I had but thick slices of lurpak on his malt loaf because I remember he physiologist telling me about fats as well as Carbs. I had made him some porridge this morning (I wish we had a microwave it would be so much quicker). I know that would be a good start but he would have to eat little and often to get him through. I was not just thinking of today as I know he could cycle it without me there but I was thinking more of the next do days in the snow and minus temperatures. That is why he needs fuelling now.

Pulling over to wait for the cyclist as we pay cat and mouse is not as simple as it would be at home. The Italians drive right up your rear if you are not going as fast as they want you go. Yes if they can they overtake but they can’t always. So when I see an opportunity to pull in e.g. Bus stop I indicate then pull in. They don’t like it and honk horns. They shouldn’t be do close. I’ve been tempted to do the slam on my brakes thing but am sure they would shunt me so it’s not worth it.

At 11.30 it looks like the rain may ease. I can see breaks in cloud ahead. It turned out to be the case. We both pulled into a supermarket car ark and went to a corner spot so kyle could receive himself. Right now I wish I could join him. That was feeling I would have for quite a few hours to come unfortunately. I had to help take both ears of gloves off and I got him to sit in the car to change his arm and league warmers, his shoes and shoe covers and put his motor bike German under garment on under his cycling Jersey. At least he had dry kit for the next bit. His shoes and everything were soaked through. My job wash to turn he eater up full blast and position it all around the car so it would dry boy he next 50 mikes so he could change into dry things again.

It got a little warmer in the sun but it was not hot as the wind was cold. We stopped in a Lidl car park, empty due to the two how closing for lunch that they all have here. he whipped off his arm and leg warmers and took his thermal biking top off. We happened to be there at 3pm when Lidl opened agai. So I popped i. In search of a tin of pasta and meatball soup like the cyclist found the other day. No joy. I did wonder. He had got it from a rack that had specials on. Although we get it in the UK I think it was angerman specials as they had meatballs with sauerkraut too. It sounds awful but he likes it mixed with rice for his dinner. It looks like Greul and he calls it gruel. No wonder I stick to a slice of bread.

I had all the kit including waterproof socks and overshoes that were so wet I had to wring them out first. Driving with the heater on full pelt with shoes placed on the floor over the vents so the hot air blew though. A leg warmer across my feet as I drove for the vent in the drivers foot well and the rest of the kit positions across all the vents on the dash. It was like being in a sauna so I opened the windows slightly despite the range, so I could get some air. Flipping worked though as the kit was all dry within the hour. 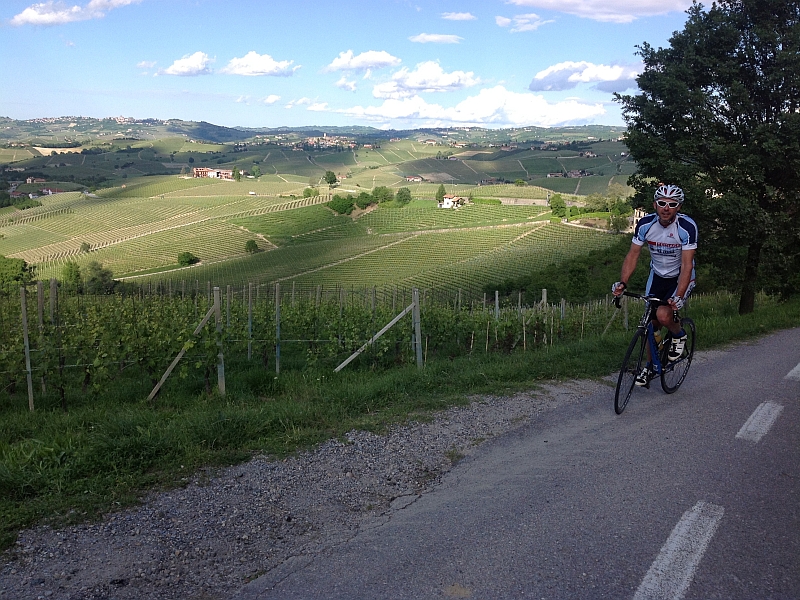 Kyle’s Garmin had re set itself at lidl as he had hooked it up via usb into the car to boost its charge. Oh dear this made him mad and the cyclist got himself all worked up again. He will give himself a coronary the way he gets so cross with objects or poor Internet. He says if he sees my Garmin when we get back he will smash it so I will need to keep it out of view while I figure out if there is a T Tom Tom that will accept uploaded gpx routes.

This afternoon in the sunshine I had pulled over to take a photo but the cyclist was waving in an attention grabbing way. He had just got stung in his eyebrow, and said he is allergic to wasp stings. I took a look and could see the sting with so e insides still attached sticking out just under the edge of his eyebrow. I pulled it out and showed him the offending sting saying I believed it to be be a bee then as wasps keep their stings and sting repeatedly. His right eye had begun to swell a little but as he never used any of the anti histamine tablets I took last year, I didn’t bring them this time as I was doing what I had been told and reducing what we took. Later on when we got to our hotel it is swollen and half closed.

This afternoon we have been through Asti county where everywhere is a vineyard, Barolo vineyards and have seen many wine houses all along route this afternoon. I couldn’t stop though which is a shame, loving the grape juice as I do.

All the hillsides were covered in vines. Compared to the south where we began this is much more affluent. It was lovely to go up and down through the hillsides and towns. We went through a large town called Alba which looked really lovely, the sort you could spend a couple of days. All i saw was the going home rush hour traffic and motorists getting frustrated at each other. Still while I was stationary it gave me time to do lots of rubbernecking through my window to the world. At least it was sunny and this makes everything look nicer. Yesterday I saw a village called Arsie. Today there was a town called Bra. I also saw garibaldi, canelleni (as in the beans) and lots of other food related town names on road signs as I drove past. 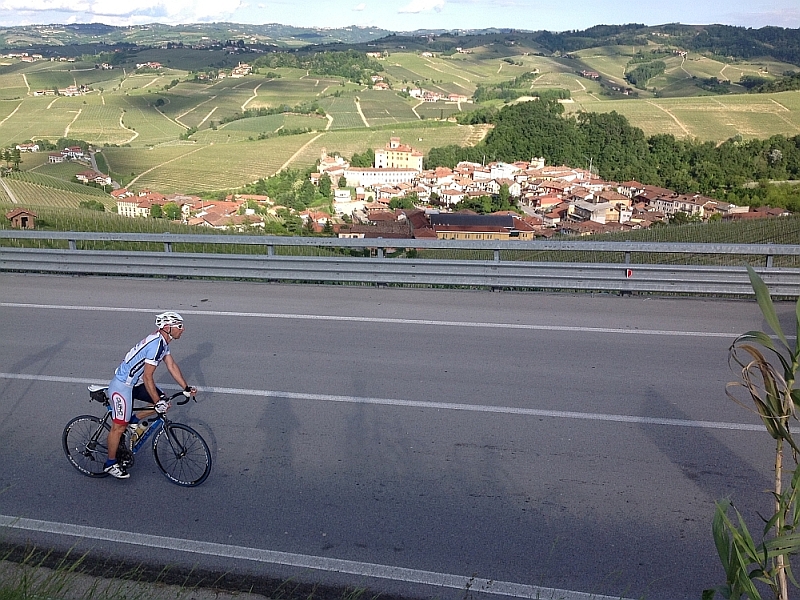 As we went up today’s climb I could see the big mountains in the distance. To the eye they were clear and gleaming white as the sun shone on the snow that covered them. You will need to enlarge the pictures here to see properly I suspect but believe me they are truly snowy. And that is where we are heading.

Considering the day started out terrible, the cyclist picked his legs up as the rain cleared and I fuelled him and it turned out not bad. The cyclist said he was going to call his blog on www.3gt4tct.org “A day of 3 halves” as our day didn’t make sense either and it was in three parts. Good eh!

My favourite soundtrack sound bites today : Bang Bang- B A Robertson. Days of Pearly Spencer – Marc Almond. Split enz – I Got you.