Give me a map please

The cyclist set off without me or before me, if you like, today because I desperately needed to find fuel before I got going. I didn’t know we were so low on fuel as I did not do the drive from Firenze to the farm. Otherwise a trip yesterday would have been on my agenda. However it was what it was. On the journey for the farm to the start point I had programmed Co-Pilot with everything from the official Giro itinerary as I am quite risk averse in these cases. I had checked both sat nav devices for fuel stations. Interestingly, co- pilot wanted me to turn right just after I set off and the again said turn left. As I had missed the first way point off co-pilot and because the cyclist had told me he had pre programmed both his and my Garmins, I decided to go with the Garmin as the past two days it had been on track with the bikes Garmin. (It should be as exactly the same pre plotted route was uploaded to both devices).

I had seen from Co-pilot that there should be a fuel stop along its chosen route and as I assumed that the Garmin theoretically had turn by turn instructins that the cyclist was following, I thought I would go with the Garmin today. After having fuel put in for me ( I have explained before that the fuel stations are attended service here mostly unless you have a local card) I duly followed the Garmin. The Co-Pilot device on my phone, which is hooked into the cars USB, kept turning my music down and to make turns and U-Turns against where the Garmin said to go.

The long and the short of it was the Garmin directed me onto a major dual carriageway with a road number that was certainly not the minor road I was supposed to be on. But I had no choice at this point as there was no getting off. I got my phone and looked at the route I had plotted earlier together with the official route uploaded to the iPads kindle, and I picked a town that I knew would put me behind the cyclist. That way although I was behind I knew I could eventually catch him, rather than not know and be I front without knowing (this was part the cause of the disastrous days heading south in Italy). Finally at about 10.30am I caught up with e cyclist telling him I had been on a wild goose chase. If I had a map, then I could have looked at the roads and villages from the Giro itinerary and seen exactly which way I was supposed to be heading.

After that we stuck close and I began the photography that would turn out to be quite a lot of photos. The two extremely steep mountain climbs were at the end of the stage today and I made sure that the cyclist stopped I. Good time to take a hearty lunch before beginning his ordeal. The sun was popping in and out, however there was a storm on our tail and I could see the big black clouds catching us as I hopped in and out of the car for action shots.

The first climb was never ending and it got colder (obviously) and more snowy as we got to the top. The cyclist commented that it was a god forsaken place when we did get to the top. This was after numerous photos of the cyclist and waterfalls. At the top I got him bundled into the car for a warm because it was flipping freezing and windy while I fed him lunch again. He wrapped up warm for the descent after taking in various caffeine gels/drinks as the next climb started at the bottom of this one and the descents are cold and stiffen your joints.

At the start of the second climb the road wasn’t steep at all and when it got to about 10km to the finish and we still had nearly 1000m to climb the cyclist said it meant only one thing. It was going to get steep. Very steep to climb so far in such a short distance. And not unexpectedly he was right. It was steep alright. The little Meriva’s auto box dropped itself I to first and screened up some of the hairpin bends. When I stopped to take pictures or video of the cyclist on these inclines I did wonder if I could get the Meriva to get going again. The road wove in and out of tunnels (who’d have thought) on It’s way up the climb. Some of the hairpins gave me the opportunity for some good panoramic but cyclist focused shots. I don’t just stop anywhere. I drive ahead looking for what could be the ‘money shot’ of the day. I get out of the car, look through the ipad and camera to set up shots or get in the perfect position. I even revers or U turn if something appear s unexpectedly. Today both up and down mountains I was in and out of the car taking pictures of pink bicycles done up for the Giro passing. 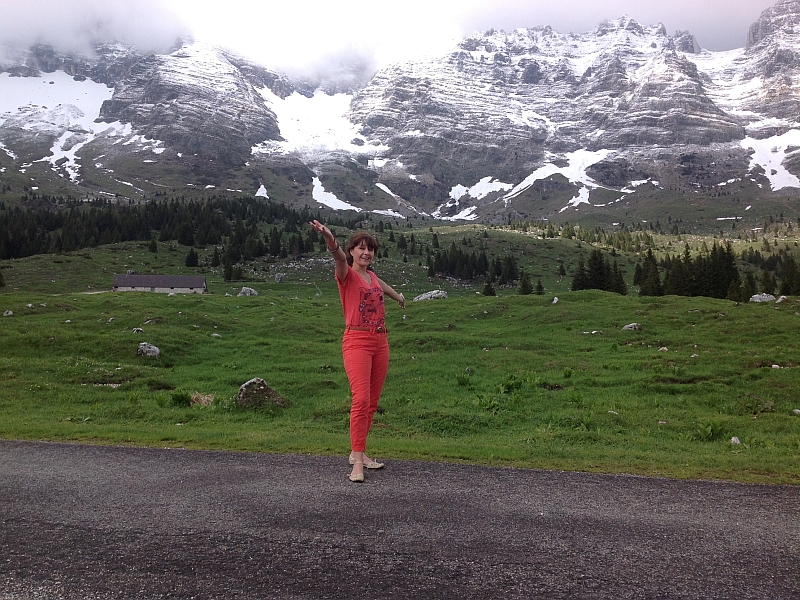 At Altopiano del Montasio at the end of a very hilly, very steep stage 10

Last year for Le Tour everywhere had been decorated for the I pending tour a week later. The Italians do not seem to make such an effort for their own National Grand Tour. I know Le Tour is an institution but as the Cyclist commented today as we were descending form the finish, the Giro is a much tougher tour and is for purists.

We arrived at our hotel, just missing the rain again, and as it was a pizzeria and restaurant I asked the cyclist if we could eat here instead of me cooking more pasta. When we had arrived here I had to immediately get him a cup of sweet tea, nuts and Pasta before he could do anything else as he was that cold and empty.

Showers and downstairs for pizza and salad. Lovely. Not drinking and not eating much has affected my liquor tolerance. I hadn’t had two glasses before wine had begun to go to my head. The cyclist finished it for me, then off to bed.

Soundtrack: couple of Status quo tracks (makes me think of he boss and I doing the ‘Quo’ dance to Caroline. Johnny Logan. Sam sparrow. Sad Cafe.

P.S. I am gutted the Bonnie Tyler only 19th in Eurovision. The cyclist says he doesn’t know why I bother because I get myself worked up the same every year.