Giro Stage 17: A day of wind and traffic islands; and it was all going so well too

Today as we started it was grey and blowy. We had a short drive to the start, around a cathedral sized church and a beautiful tree lined road to end up on a side road of an industrial estate. The cyclist offered to retrace our steps for a photo on the tree lined street, but it was 9.30am and as much as it would have been nice, I had heard his warnings of the length of today’s ride in my head. So off we went from somewhere not on the true Giro start but near it. It was a very gusting wind and was blowing for the first third of the ride, even blowing the cyclist across to the other side of the road at times it was so strong. Awful actually.

I prayed for no rain and no wind today as regardless of what he says, I know he is tired. Mentally as much as physically. Yesterday’s 150 mile jaunt with a mountains at the start and a shorter but steeper climb at the end would be what some cyclists aspire to, but this was just another day that had to be completed for my cyclist. And today was 130 miles again. Mostly flat, but this is the Giro. When they say flat they don’t mean it aa they know when and with what bits of road to hurt you with. And they do. Every day.

This may have been a fairly easy route to follow in the beginning but boy was that road fast. It wasn’t Pleasant in a car but it would have been worse on a cycle. Despite it being a fast road the Italians have built big islands every 1.2km. Why? I mean i counted over forty before I lost the will to live. Maybe only way to slow the drivers down?

I got a copy of the Italian Highway Code from a super market and used google translate to understand Italian road etiquette. This is what it said.

3. Indicators are not needed in Italia.

4. The more people you over take the better driver you are.

5. Speed limits are only for visitors driving in our country.

6. The only way to drive behind the car in front is to be as close to him as possible.

7. Use your car horn as often as possible, even if it is not needed.

8. Do not let other drivers into your lane.

9. Take up as much room on both sides of the road as possible.

10. Always blame the other driver even if you are in the wrong.

11. Finally, always give cyclists a wide berth especially if you are in a lorry.

The 11th rule is the mlost shocking and true as it goes against everything else they do. the italians respect and give space to cyclists while in the UK we try to run them off the raod.

It is 20 degrees plus in the sun and the cyclist is trying to be faster than the storm that is chasing behind us. I am drying his shoes from yesterday and its roasting in the car. It doesn’t smell too fresh either but that is to be expected I guess with then being soaked in sweat and road fodder..

We saw a nice old castle with ruins along the way. On the approach it was a good photo op’ so we stopped for photos and when we got into the town we pulled into a nice square stop for his lunch. One of the photos here is the one of the river cascading river with the restaurants and houses on its edge. A glass of local grape juice in the sun there, would have been appropriate in any other circumstance I think. The sun was out though and he was making good headway so all was good. It doesn’t matter where we are the strange car, woman driver with a cyclist causes great interest.

We did well and with one more sandwich stop to keep him going we were within spitting distance of Venice. It was a steep old climb and he was working hard and concentrating after the 150 miles he rode yesterday then 130 today, which he cycled as fast as he could because of our transfers. We have differing views and approaches to things, the cyclist and I, but I know he was cycling hard for me as much as anything as he knows how tired I get and that its not just a case of flopping down when we get in. There is still work to be done as the cycling is just part of the days work. For this I am grateful as I am fully aware that he is tired too. Who wouldn’t be after all that cycling!

Near the top of the climb I lost him. I had taken a photo and while hopping into the car I didnt see which way he went. A few yards on there was what looked like a driveway to the right as it was so up and narrow and the road also went round to the right. I followed the road but as I did the Garmin said I should have taken the other way. I reversed and tried to catch the cyclist up, but the descent started almost immediately and it was very narrow and winding. I went as fast as I could and when 10km later I got to a junction with the main road, the cyclist was nowhere to be seen. My heart sank. Oh my. Either he did what I did and took the wrong road or he has gone on and taken the road into Venice without me as we were only 8.5km away. In my heart I thought he would have waited at the bottom as we knew there was a 2hr drive to the next hotel and it was later than we needed for us to be on our way.

I waited at that junction for about 10minutes hoping that if he had gone the wrong way the top he would correct himself and come down this way. I knew it was the right way because of all the pink ribbons for the Giro tied everywhere. After what felt like ages I thought I would drive into Venice incase he had just motored on expecting me to follow him. Off I set, but after about 3km of islands and a major junction I just knew he would have waited for me, as it is these built up areas that we find most difficult and can gdet split up. So I headed back to the bottom of the climb, where I had been waiting before. But this time I decided to go all the way back up incase he had a puncture or had fallen. I zipped up that climb throwing the little Meriva this way and that, with my heart going ten to the dozen. This could be a complete disaster if I can’t find him. The B&B where we were staying had to get their old father to let us in and we had been told he knows no English nor understands card machines etc so we could we pay cash. Oh yeah? But their father was wiating for us and it was only a B&B not a hotel.

Anyway, at a fork in the road near the top, I could not remember which one had flown down previously, so I did one of my famous 3 point turns (I can do them on a sixpence you know), and went back down the climb. At this point you are probably having some thought about my sanity or what you would do. All I can say is I have been here before and it isn’t pleasant. Keeping one eye on the road, one on the cyclist and one eye on spots for good photos is not as easy at it sounds believe me. Those in the know are the Sports Masseuse and JosieCakes. You know don’t you ladies. You remember the BrianÃÂÃÂ§on fiasco last year while doing Le Tour. I was on my phone calling the Masseuse in distress. The cyclist had gone to the tourist office and asked the nice lady if he could call the only number he can remember which was JosieCakes. The rest is history but painfull.

At the bottom I decided that I would follow my Garmin into Venice and head for the railway station. The cyclist had said a few times that the end was at the station. He should have a ÃÂ¢ÃÂÃÂ¬10 note and my mobile number with him. I also wrote down Mrs Chimneys mobile number and Angel No1’s mobile number too in case of emergency. So if you two get a call from a strange number answer it as you may be helping us out in a pickle.

I got caught at some lights at a junction going in to Venice and while sat there I saw two cyclists riding across. One was my cyclist. I did all I could to get his attention so I honked my horn. Now the cyclist had warned me about the Italian love of hone honking and previously he had ignored any attempt I made to attract his attention with the car horn, thinking it would be some mad Italian. All I can say is that it was an instinctive reaction. But this was no Italian short honk. It was long hard And then tuneful as I pressed again and again. It worked because he looked. He can’t see a thing you know with those eyes, truly, but his head turned in the direction of the car horn and he stopped suddenly nearly knocking the cyclist behind him off. The relief I felt at that moment was immense. I pulled up to him and he was not as het up as me because that isn’t his way. He did go over the wrong way and ended up where we began the climb miles away. So after waiting a small while for me he headed for Venice station hoping I would have done the same.

The cyclist said I had a choice of stopping now and getting to the hotel or still trying to get to Venice station. It was 1.5 hours later than we needed to be leaving so I said let’s get on the road. Actually it wasn’t as polite as that but the meaning is the same!

Another motorway, more mountains and Lake Garda was somewhere to our left. Another B&B we couldn’t find. Thank goodness for the remains of the hot roast chicken and IntermarchÃÂÃÂ© on the French/Italian border as I had cold food that would feed the cyclist that night.

We watched our final episode of Death in Paradise on the ipad before passing out to do it again tomorrow.

Sound bites: The Matmalade, Ob-La-Di, Ob-La-Da. Quite up lifting.

Sandy Denny , London. The one used for he Olympics last year.

Need a wind theme song boss because I can’t think of one. 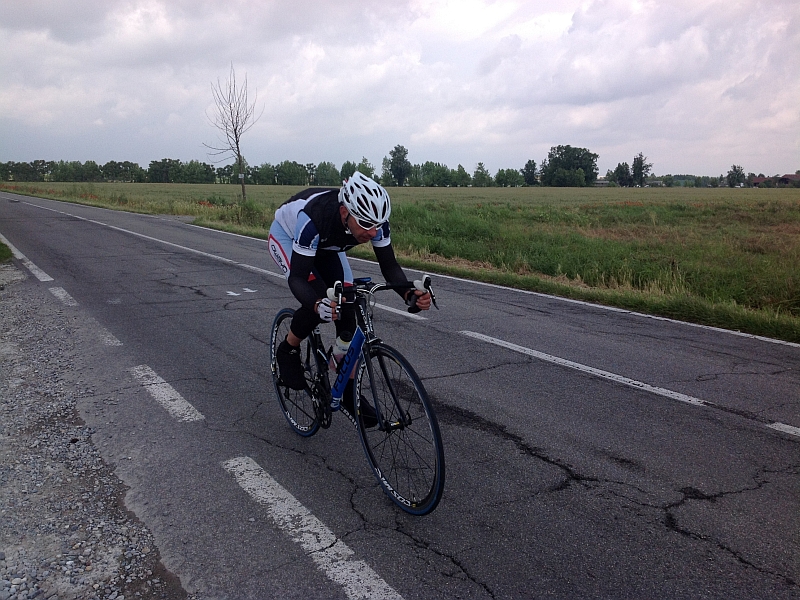 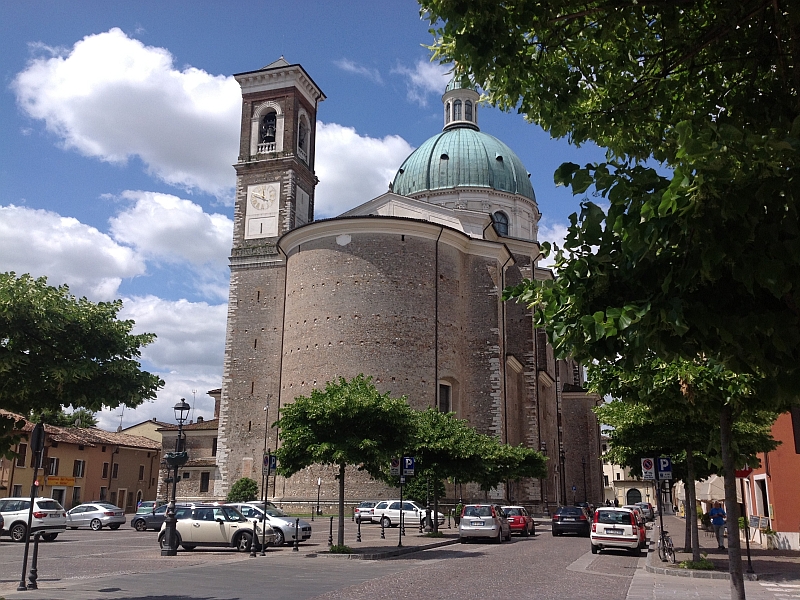 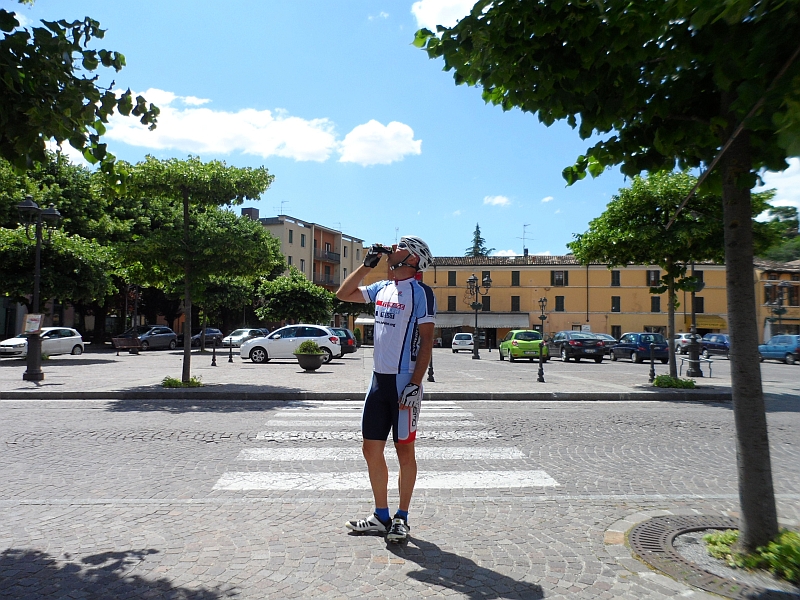 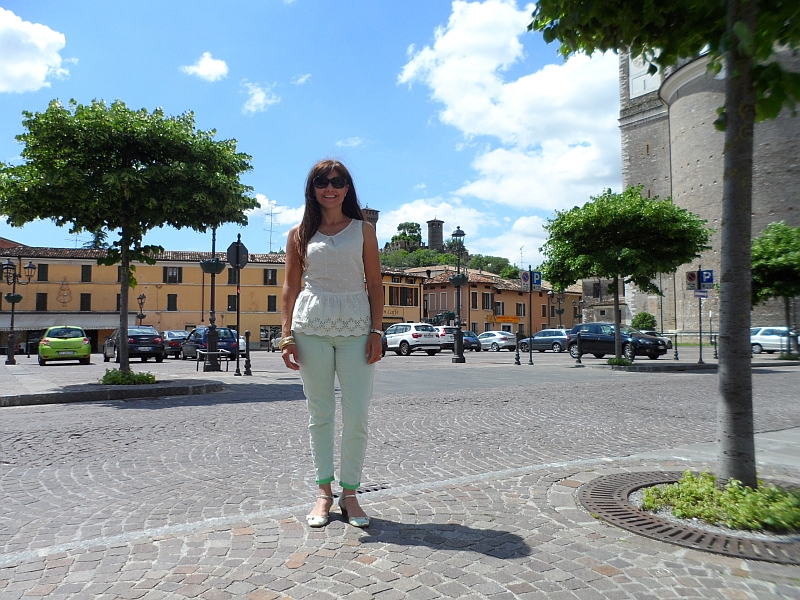 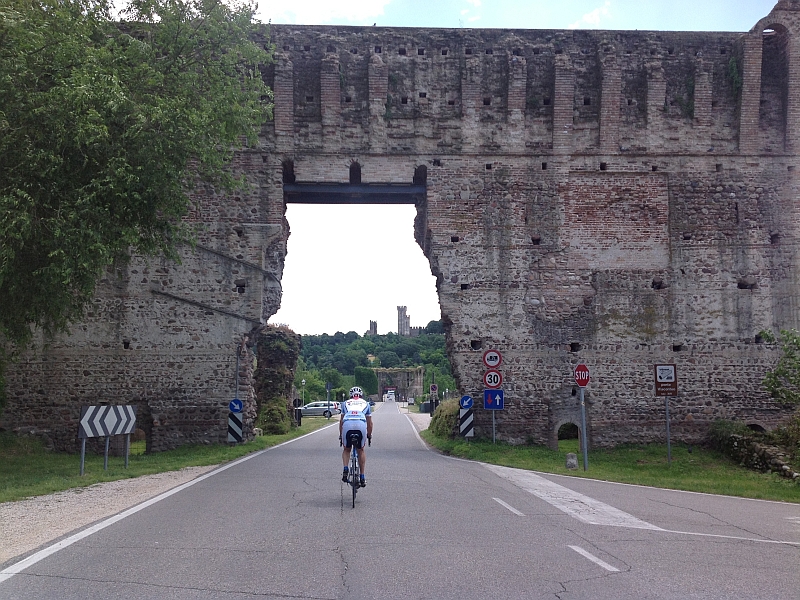 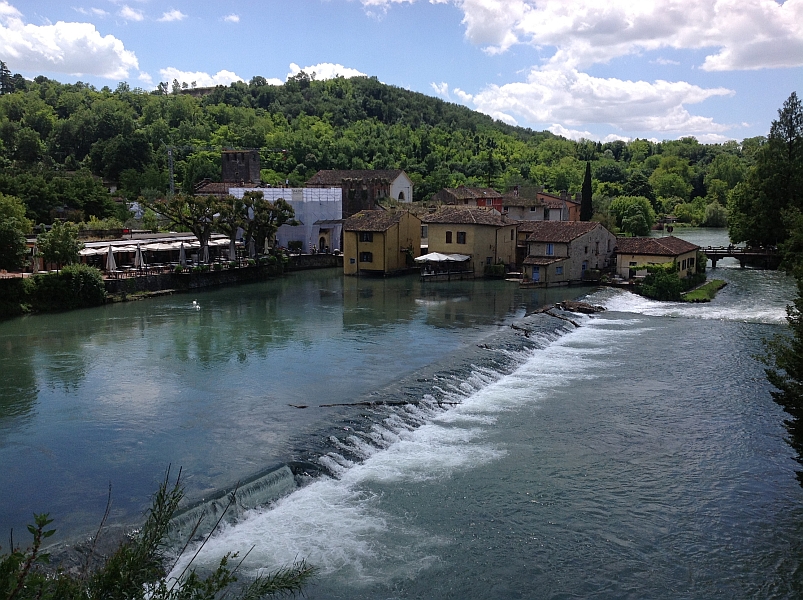 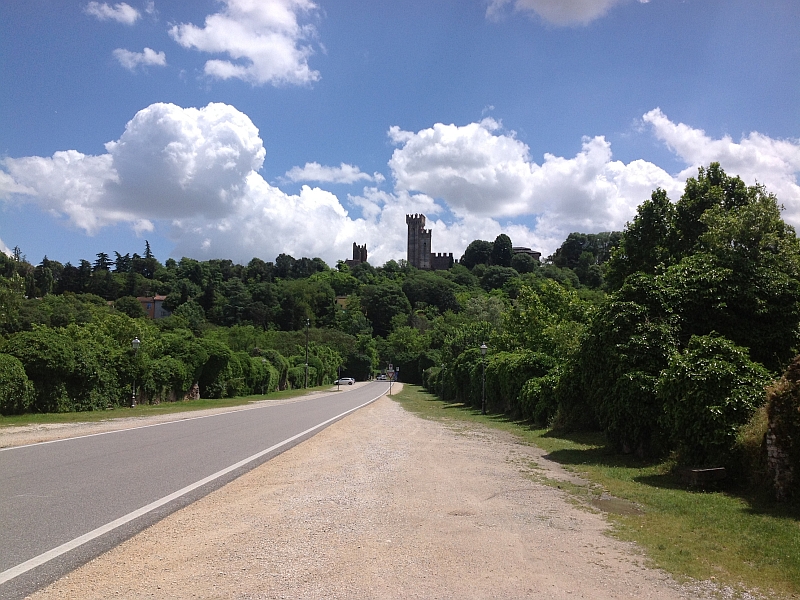 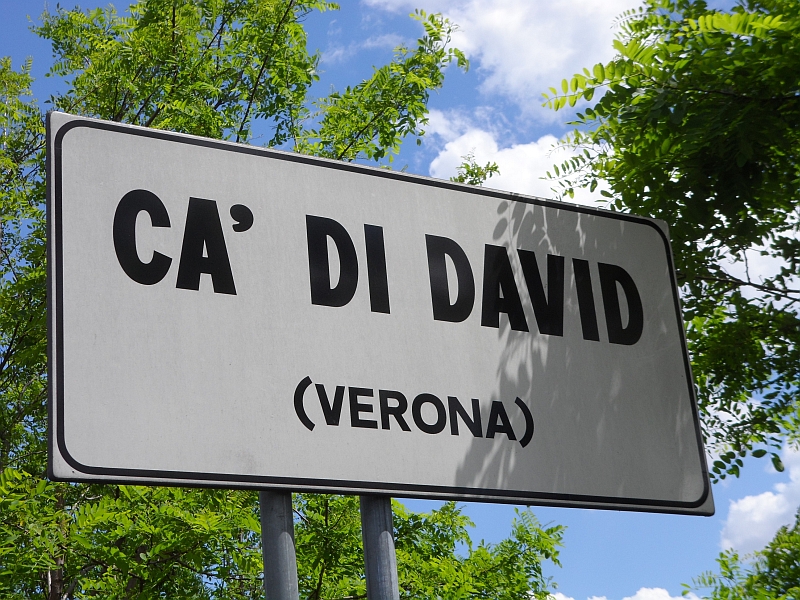 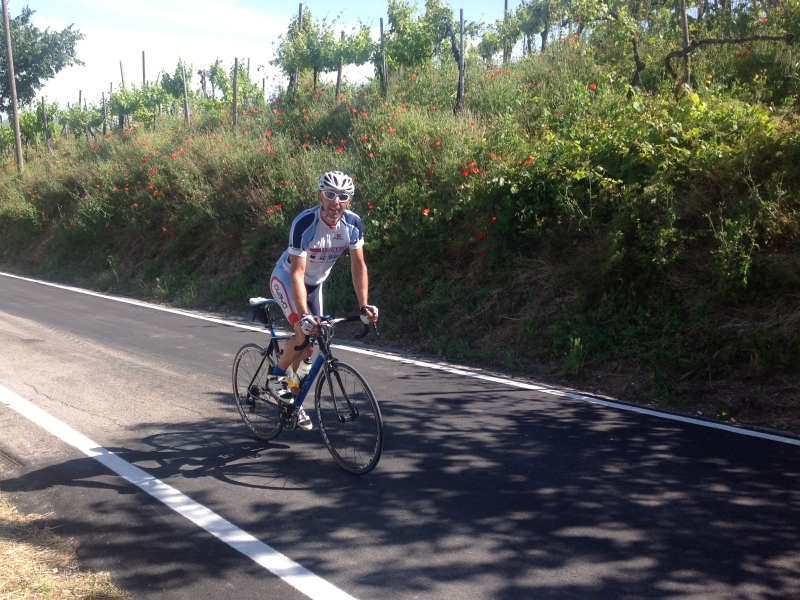 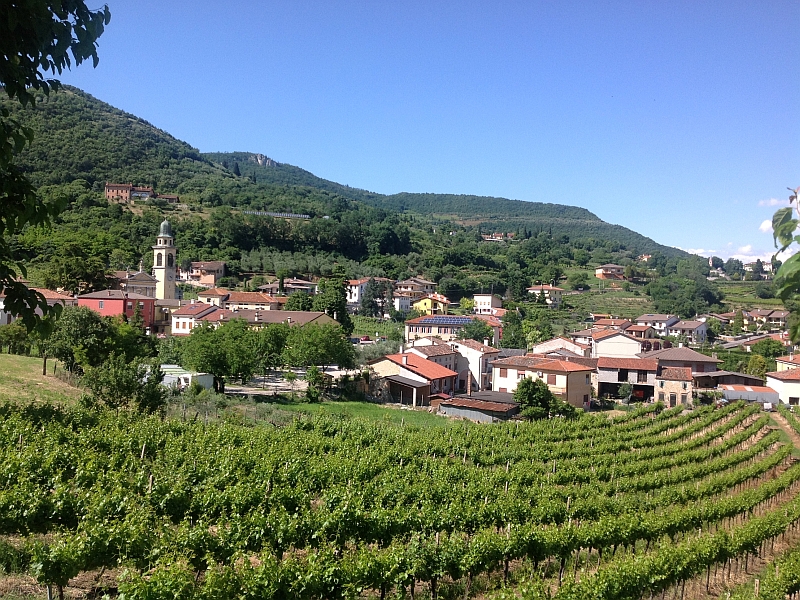 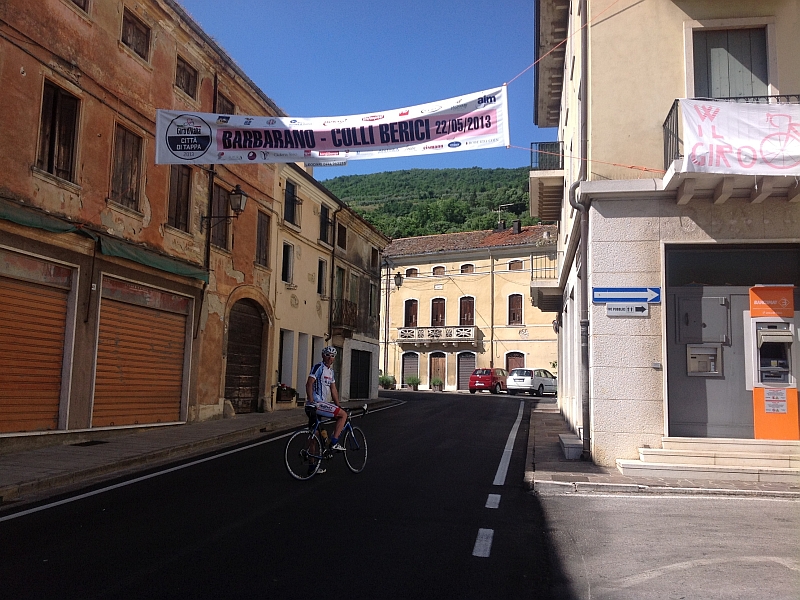 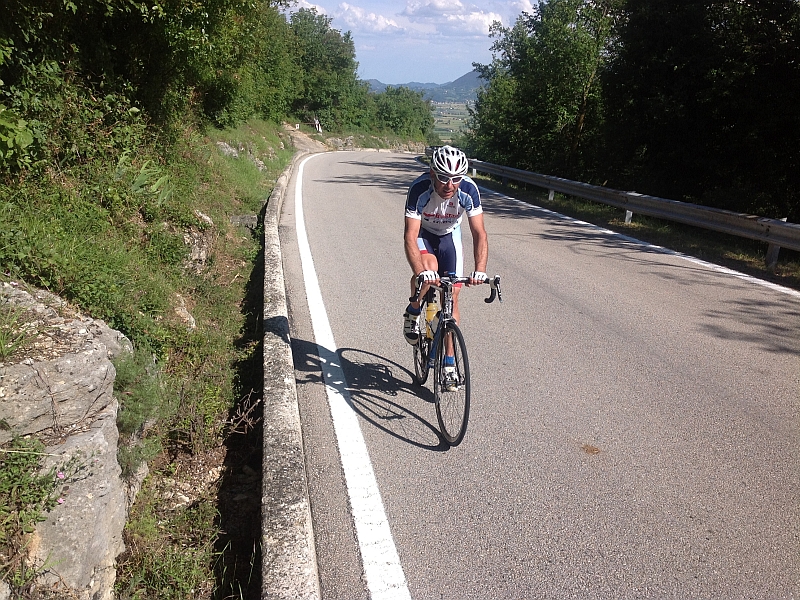