Giro Stage 18: Someone once said the Grand Canyon was a hole in the ground with different viewpoints

Today was a time trial but up a steep mountain. Now, in Le Tour the time trials are flat and fast. The idea is to see how fast you can go. Well a mountain time trial is a bit unfair for the likes of @markcavendish who finds mountains very hard. Any way this is not the Tour, it is the Giro and everything they do is harder, steeper and more complicated than the Tour. At least the cyclists legs should be good to go when we get to France. And he will be grateful to the Masseuse for his first 3 days as she will be with him not me. She will, I expect, see that his legs are rubbed far better than I have managed on this tour. In that particular role I have let him down. It hasn’t been that I haven’t wanted to. It’s just that the rides are so long and the transfers so long that by the time we get in and have done the essentials we both fall asleep.

As the cyclist was unimpressed with my photographic ability yesterday I had to try to redeem myself today. I was hopping in and out of the Meriva like a mad thing all the way up the mountain. The views were lovely and I tried to get shots with a nice back drop. But I did begin to think, it’s nice but its just another mountain. We have seen lots so far and we have more to come. In Italy, France and Spain. How many beaches I wonder? The next mountains are the big ones. Those that are for the men not boys. The mountains are beautiful but I have to say I keep thinking back to the last time trial day at Gabicce Mare and the warm sun on the azure sea. The beaches. And that it was actually the only time in all of the last 3 weeks when I actually took a breath and felt calmer. That is what I need on a holiday. Something calming where you can feel at peace. One day in what will be 24hours short of 4 weeks of constant on the go turmoil is the only day that was truly enjoyable.

It was lovely to get a text from the Boss this morning telling me how busy I was going to be on my return to work on Tuesday. Lovely. We have 36 hours to drive back from North east Italy on Sunday to Bewdley on Monday night ready for me to go back to normality first thing Tuesday morning. That is no mean feat I can assure you. So It was really nice to get the text.

I will let you decide if you think my pictures were back on track today. However near the top of the mountain the cyclist announced that his cherished Focus cycle was on its last legs. It is in dire need of a service after being bumped and shook to pieces on the Italian roads and from the grit and rain. He got to the top and we set off for today’s destination at the bottom of tomorrow’s first mountain while looking all the time for cycle shops. He has his spare bike as you know, but it too has been shakes and is gritty from just being attached to the car.

On arriving in yet another ski village up a mountain, (1258m), although it is at the bottom of the Gavia pass, we are ensconced in our room. The kit washing is done. The bottles are in the Milton and the cyclist is on the laptop trying to do what he does and also do some paying work that has come in for him. There is a pizzeria opposite but I think we both just want to sit down. We have work to do. I have the cooker and all stuff for making hot pasta for the cyclist, so at nearly 8pm that’s what we will do. And although I would have joined him tonight, the gas canister gave out after doing his beef ravioli. bread and cheese again it is then.

Going over a pass to get to our hotel it was snowing. In fact it is snowing on all the passes. The mountains are full of snow. It didn’t bode well for tomorrow and as we approached the town we drove past the road to the Gavia. It said closed. We expected as much. And as the Gavia leads to the Stelvio then two more so it makes tomorrow difficult. The guy at our hotel says that there is 6meters of snow at the top of the Gavia. He has seen pictures of people looking like ants against the wall of snow.

You may not know that this is the stage that they cancelled completely for the Giro last week. Apparently they managed to snow plough the road for the Gavia with all its 6 meters but it had snowed again overnight making the pass impassable. Also over the other side leads to the Stelvio as there is no other road around. The Stelvio was so bad that they couldn’t even clear it. They are still having snow n, as we saw getting here. This time last year the temperature was 26 degrees the hotel guy says, but it’s barely 10 at the moment and drops below freezing every night.

So we will see what tomorrow brings. X 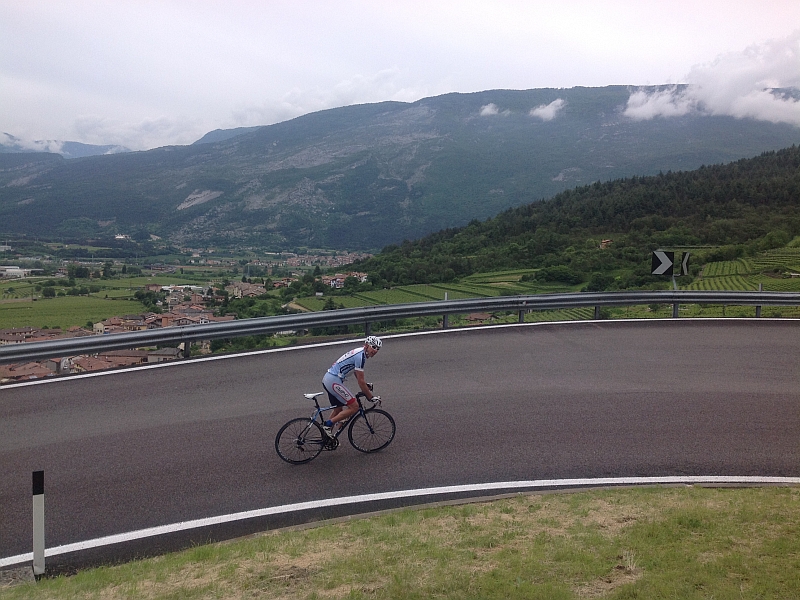 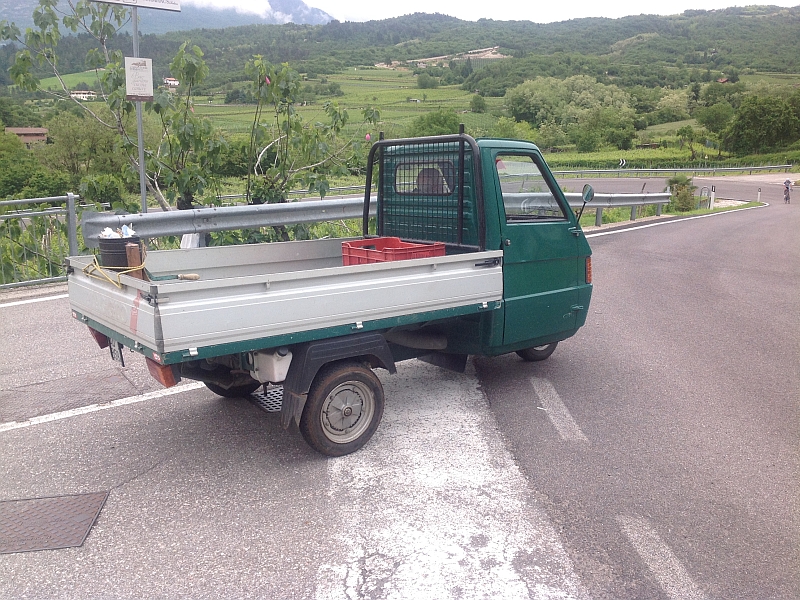 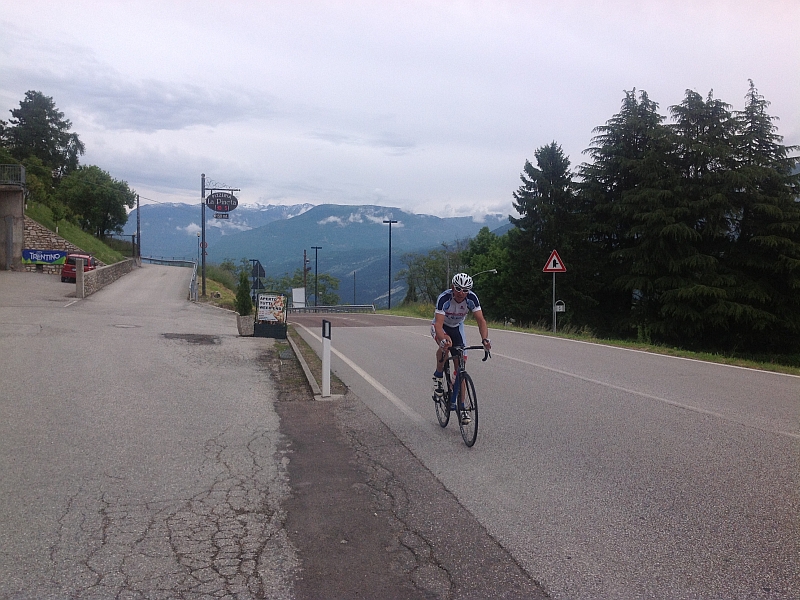 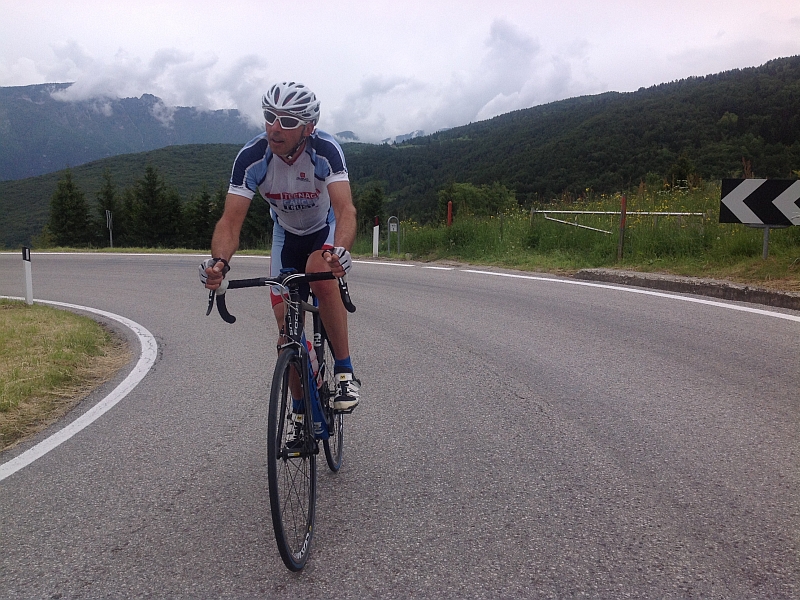 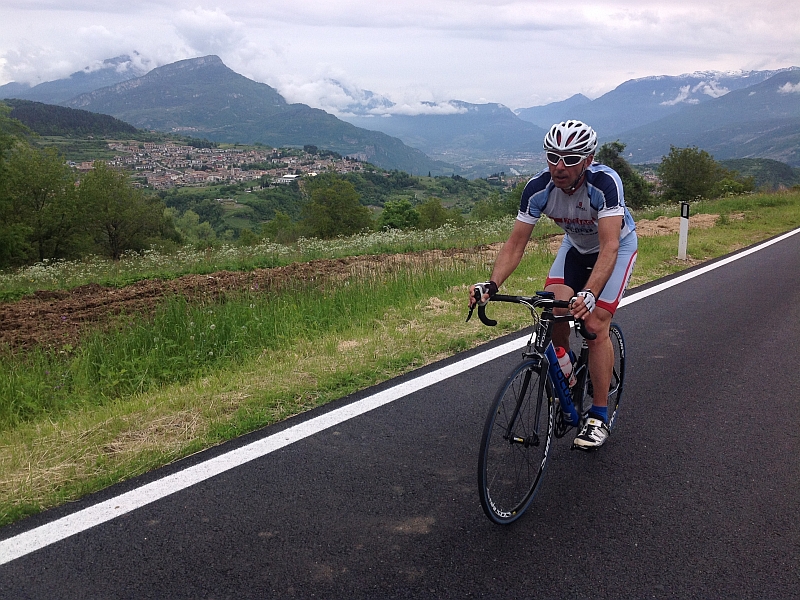 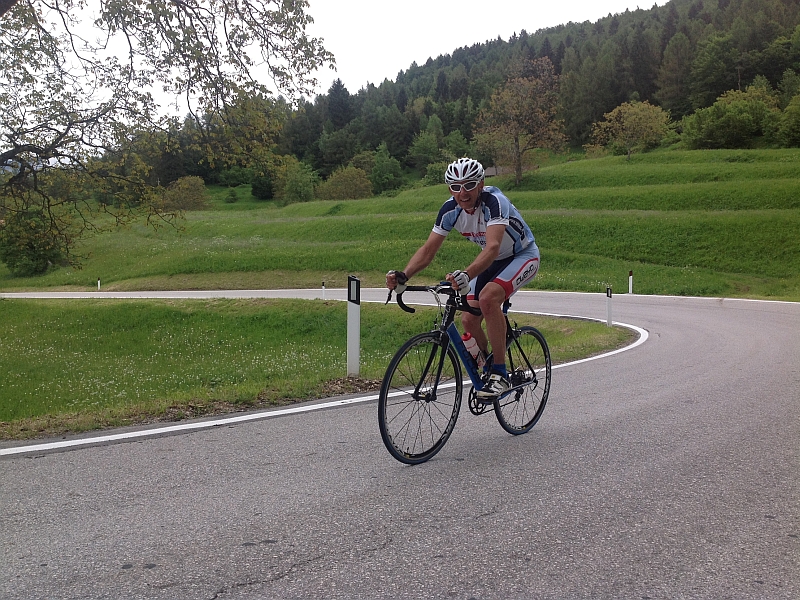 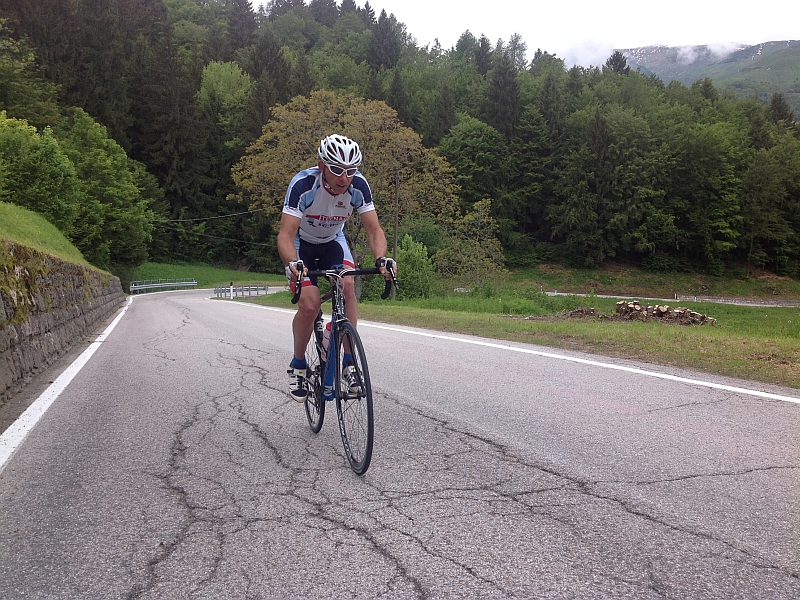 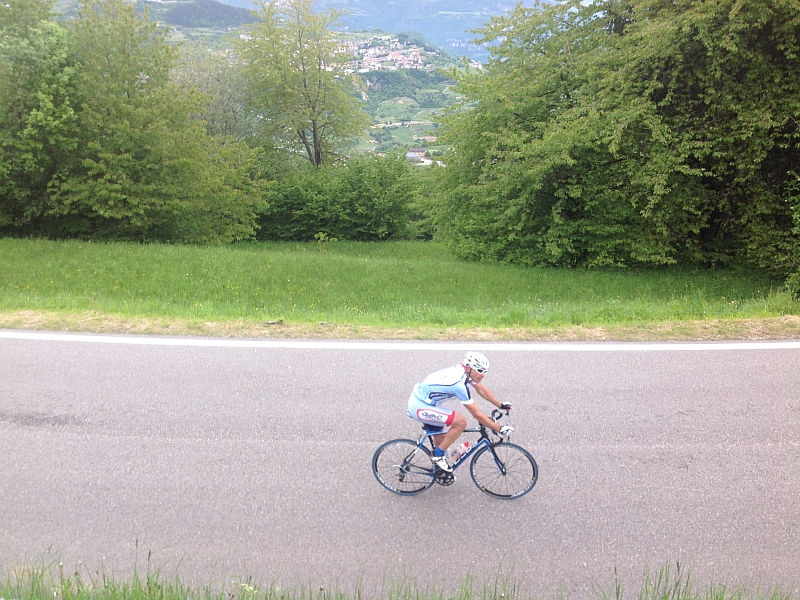 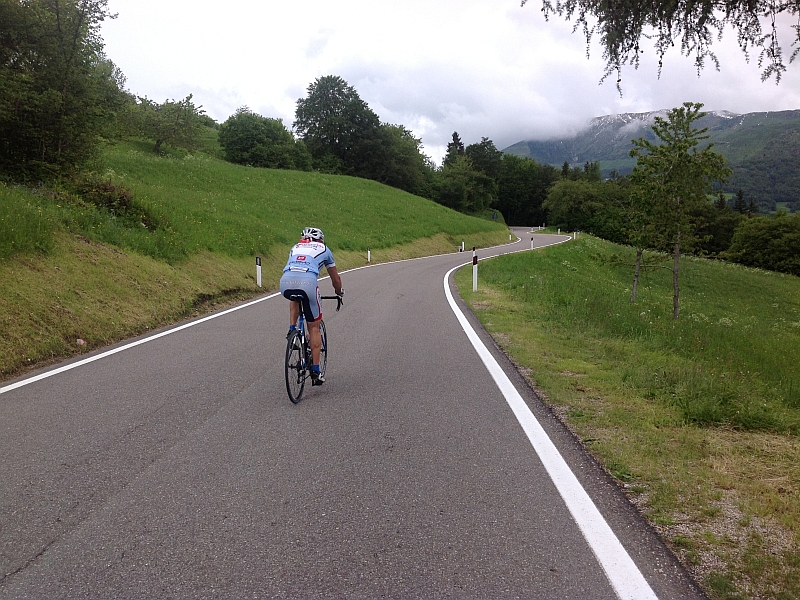 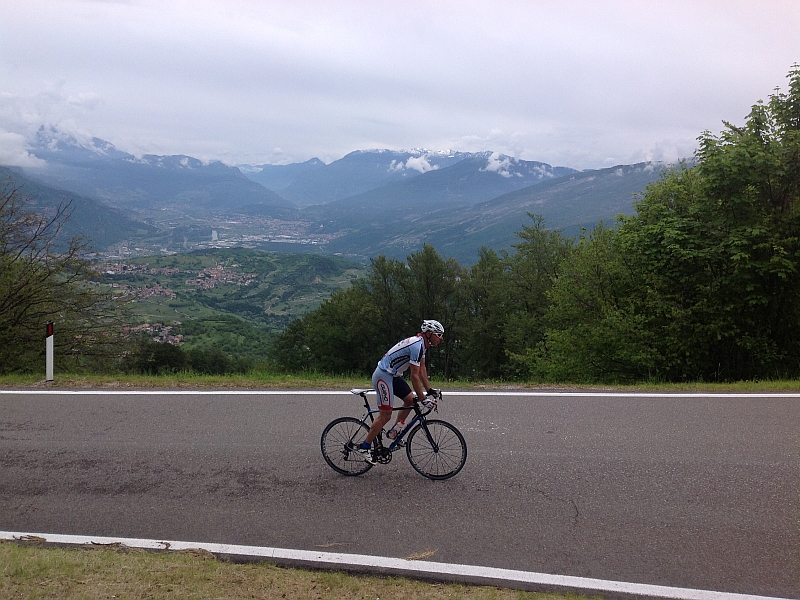 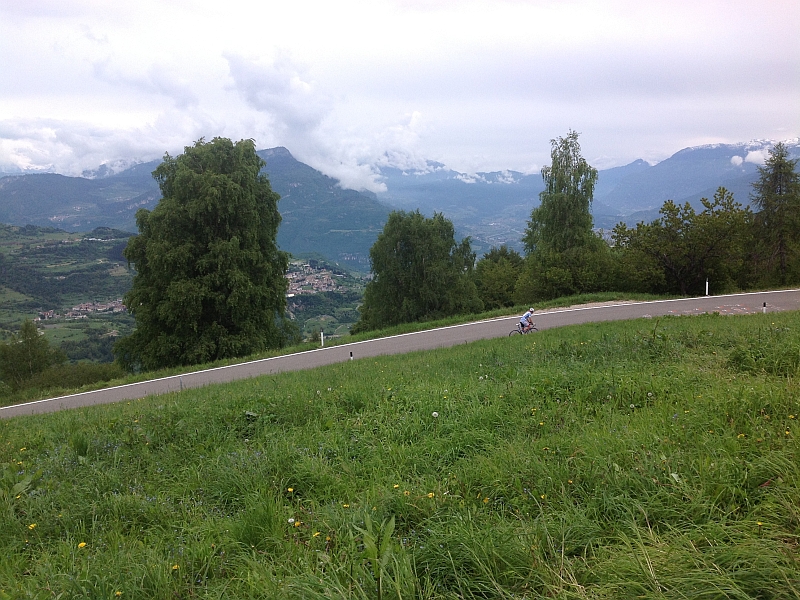 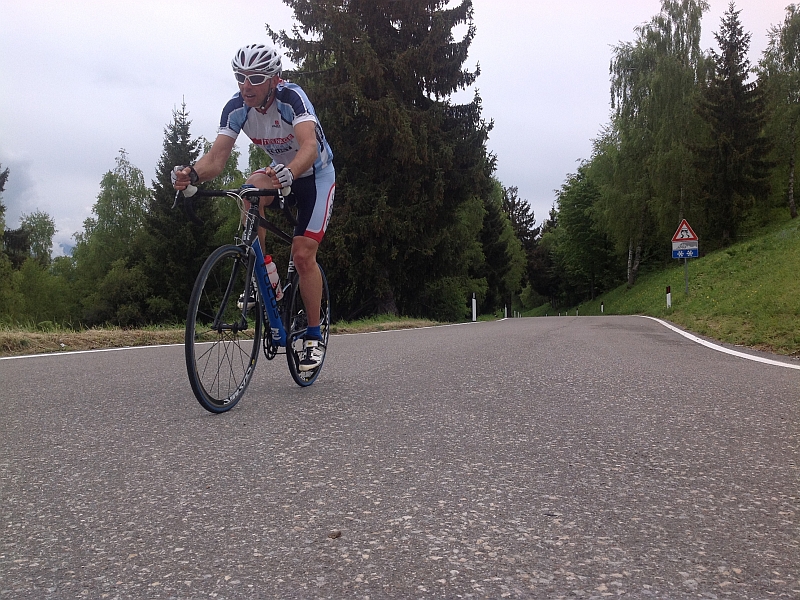 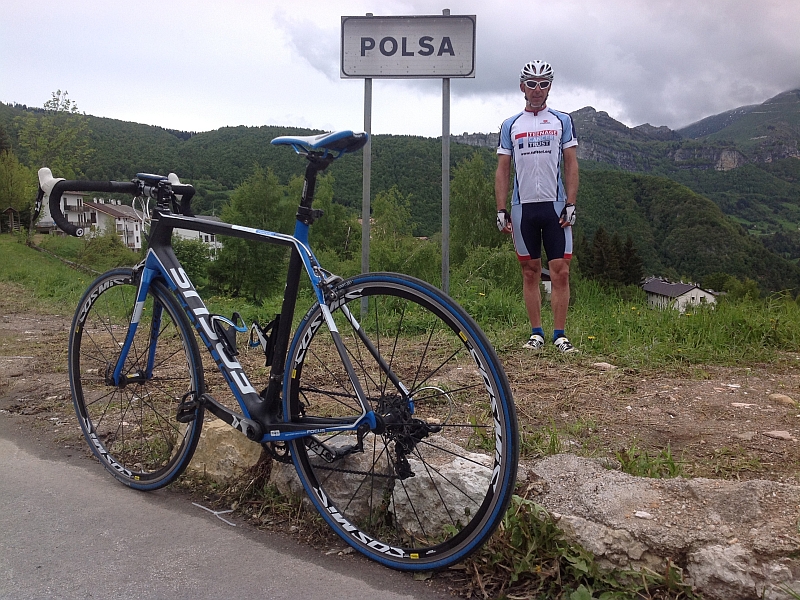 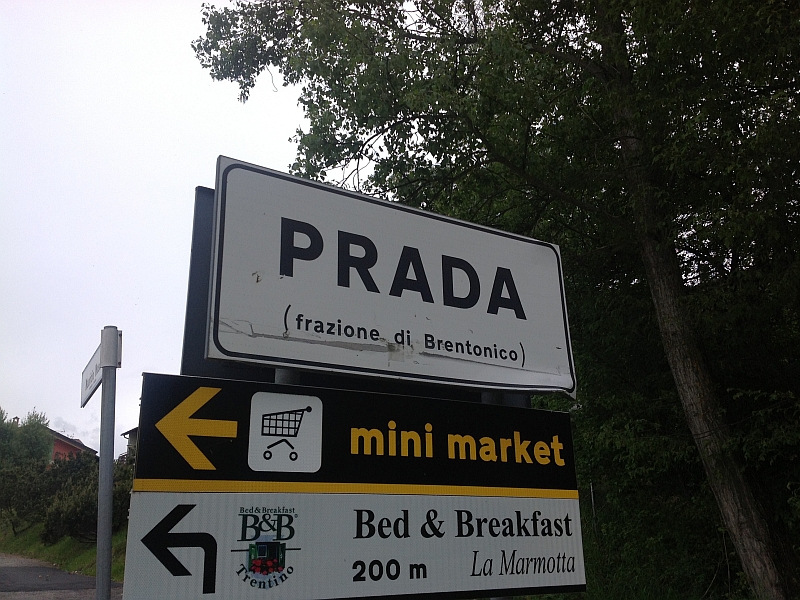