Staying one step ahead of the rain – Stage 11

The view was of mountains as I woke. All snow covered but before I could take a picture the cloud covered he high peak.

It was not a good sleep last night as the cyclist was up and down all night. Not only has he terrible toothache but now he had an upset stomach. (This is one thing the boss can sympathise with). He says that it’s the bread he as eaten and the pizza that isn’t agreeing with him. I think it s likely to be the constant use of energy drinks and the four doses a day of max amounts of ibuprofen and paracetamol. 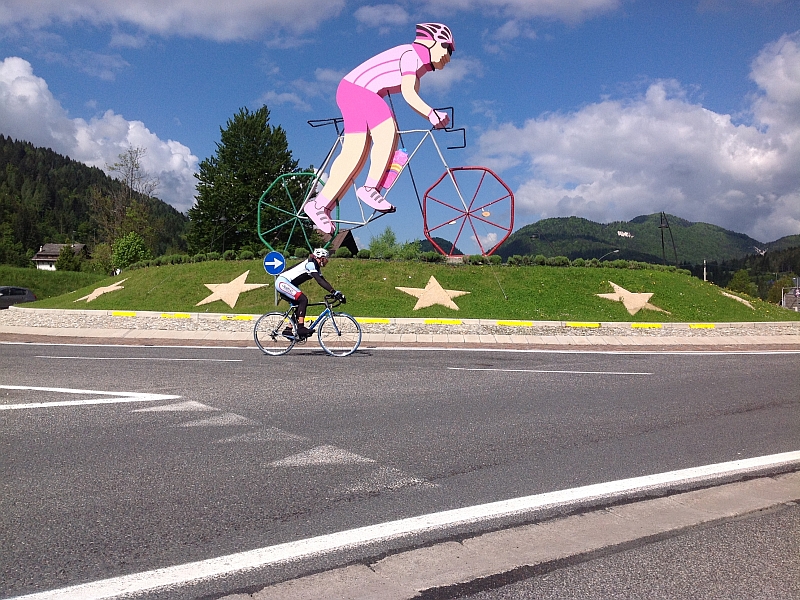 I was concerned about the cyclist and his upset tum today. Last year in the mountains he got a dicky tum and it was not pleasant for him, nor was it easy with his bibbed shorts. Under a cycle shirt no less. I sent a message to the physiologist to ask his advice on what I could give him that wouldn’t make his stomach worse. He said plain rice. As it happens I bought a bag of rice to boil with me. See, the cyclist said leave everything, but I didn’t.

Lunch on the run

I was feeling a bit fed up today because I had discovered a screw in a back tyre. Tick tick tick was what alerted me going along but now I am concerned that the tyre goes down or worse has a blow out. There is a stone embedded in the thick part of the tread too. The screw head is about 1cm across but the tyre has lasted all day. While on route I called my dad aka MM_Scimitar. (as I do in all situations when I need advice-doesn’t every girl?). As always he asked questions to established the details and advised what to do in each possible outcome. So I have stopped and checked it to see if it is ok and it is. I am savvy enough to know that although the screw head is wide, the phillps posidrive bit is very small for such a large head, so MM_Scimitar thought that I may be in luck and the screw be very short. There is a tyre place near here along the route so tomorrow I will find out.

As we went up the climb I got out of the car to position a camera shot and a Trike came passed.It was German and it stopped by the little Meriva. I asked the 2 guys with the trike if I could take a photo as MM_Scimitar has a Harley Davidson Trike back at home. They agreed and imagine my surprise when I was instructed to sit on the contraption, as you can see! It was all wide and lots of Chrome, more showy than practical I think. 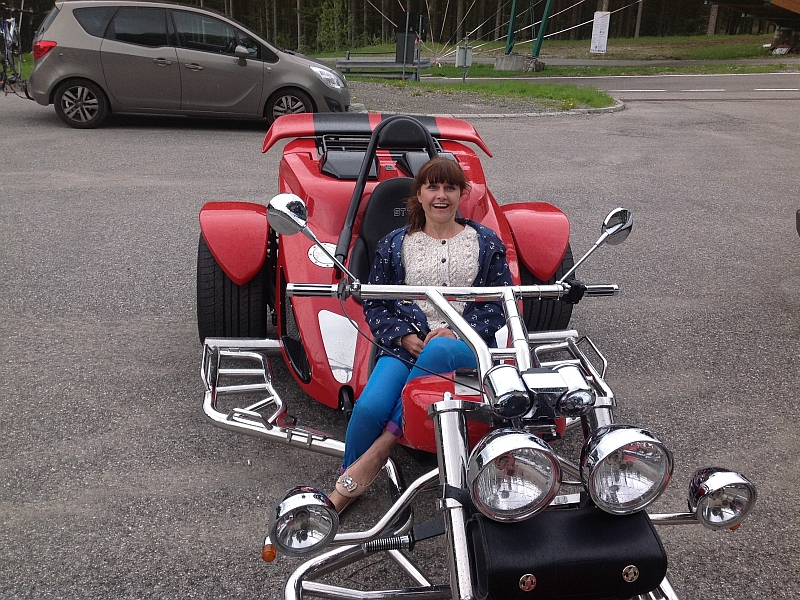 At one point on a mountain climb I was behind the car, stooped low to take picture, but the cyclist was pumping pedals and in a different world so he didn’t see me or the car as he was looking at the floor. I shouted as he got very close and he jumped from his skin, swerved narrowly missing car, as I’d moved out of way. Poor cyclist. As I looked to see he was OK, he was cycling ever upwards with his head rested on his arms over the handlebars. Every time I got out of the car today I could just hear running water, lots of it. Gushing and falling ever downwards. At the top of today’s highest climb we took panoramic shots with the cyclist and his bike trying to get the money shot. We managed this last year and the fruits of my photography are hanging on a huge canvas in the lounge. Other canvases line the wall to the basement living area. I wouldlove more but thi would be against the cyclists preference. 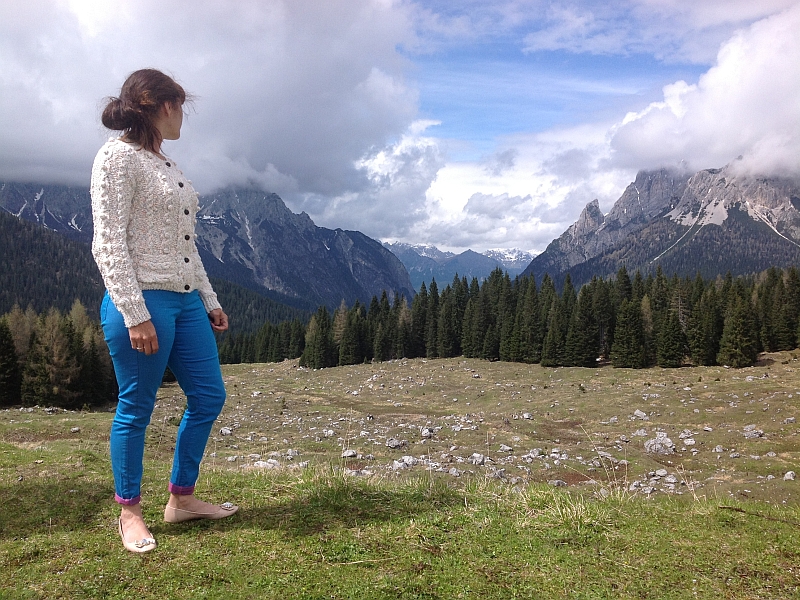 Top of the world

Tunnels appeared along the route again today. Two were 1.5 km long. In fact I didn’t see the length of one of them but it seemed to go on forever. When the cyclist plotted the routes using the Giro official roads, he knew motorways were out of the question and also some major dual tracks. Obviously not being local it is hard to know which to avoid. There was a very old mountain road that I could see higher up the mountain the our road today but once on our SS51 we just kept going. The tunnels were one after the other with the shortest being about 650m long. Our road was not dual track but being a new and major road it was very busy and very fast. This was quite a worry. Not for me of course but I was worrying for the cyclist. He did have his fluorescent ja ket on but I was pootleing at 40mph so as not to get too far away when there were cars and lorries at my rear. But at 40 they hurtled past me like I was going backwards.

Up here in the North west of Italy (about as North west as you can get as we have been only 2 Km from Austria and not much further form the Slovian boarder too), the adherence to road regulations is much better. That is apart from speed. Road signs say 50Km/no overtaking, but that may as well be 500Km and please over take. So if there was a tunnel I would try to pull over, sometimes precariously, to wait for the cyclist to pass and then sit behind him for as much of the tunnel as I could with lights on Full beam to light his way and much to the annoyance of on coming traffic. But to be honest, the cyclists safety is paramount to anything. Cars and lorries would hurtle up behind me and then have to slow considerably. They dont like it much.

Under normal circumstances I know the cyclist gets his head over the handlebars and guns it for all he is worth through the tunnels. I know this as I have followed him to check his speed and he cycles at 40mph. That’s going some on a push bike guys. You try it! Today after no sleep and feeling very rough all he could muster was 30mph. What you don’t see very well in the tunnels is whether you are climbing or descending and today it did both. The noise inside the tunnel is deafening as the articulated lorries coming I. The other direction ignore the 50 and do more like 80kmh. In one tunnel I had pulled over but the traffic behind the cyclist was bumper to bumper that I couldn’t get out to protect him before he entered. I watched him disappear with two lorries cars and a coach on his tail. I got into the flow as soon as I could and waited until I caught him. At the point I slowed to his speed for the teat of the tunnel. Today the cyclist said that inside the tunnels he was very unnerved and sometimes the noise of the huge fans sound like you have an articulated truck behind you when you don’t. I appreciate that many of you do not know the cyclist well so I will explain. If he says he is unnerved then most people would be scared out of their wits as practically nothing can phase this one!

Another climb at the end of the day was all we needed to finish him off. The cyclist has determination by the shed load, but I think he wished he was at the end of gtoday now. Having an upset tum last night has taken his energy today. He calculated our expected eta for the finish however it was to take quite a but longer. He just couldn’t ride as fast. I stupidly asked if he ad had enough but got the sharper end of his determination. Note to self- don’t ask that again.

Today’s finish was where a dam collapsed 50 yrs ago killing 489 people but it was a government cover up. They didn’t re build the dam. Flags hang along the fence with names and ages of all that died. Most were school children. The cyclist informs me that the dam wasn’t constructed well and it failed about 3 years in. 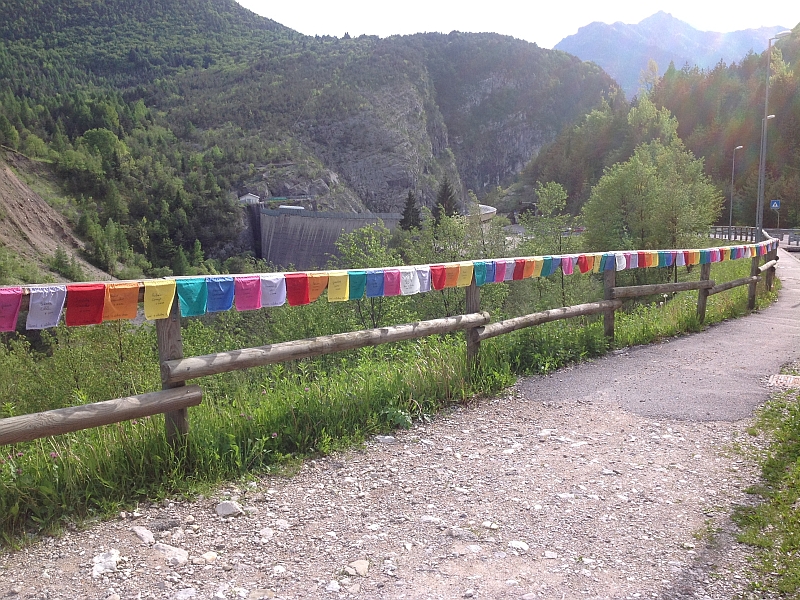 At the top finish the bike rack payed up again and the cyclist was too shattered to fix it. He was in need of another rag for tying, but having used them I donated my sock to secure the bike. I only bought one pair in case it was cold and I needed them at night. Incidentally I have used them the last few days but maybe no more. However, luckily on arriving at the hotel my one sock was given to me.

Our hotel room is lovely today. And the shower has enough room for me to bend to see to my legs without banging my head on the walls. You blokes don’t know you have it so good not having to be fuzz free! The bathroom today is typical Italian of black marble and black and white floor tiles. It is lovely. They also have towels li,e I have not seen before. One side is like a normal towel and the other is a waffle cotton. Having made the cyclist an enormous dinner I sorted the washing stuff and hen sat fr my own dinner. Which tonight was a slice of olive bread, mimi salamis, crisps and a glass to finish the Pinot Grigio. Yes there was still some left. Before the cyclist tells me off, yes I could have cooked something else for myself. But after an early start, long day, sorting him then saving my own shower. 9pm after is more fir getting to bed than starting dinner. We did eat outlast night though and we did have breakfast this morning. The cyclist and I agreed that if I could get the car packed and be ready to leave by 8am he would sit with me while I had a quick breakfast. So after two meals I wasn’t actually that hungry tonight.

Todays Soundtrack sound bites are : Billy Ocean’s Carribean Queen (because it seemed so at odds with all the snow around me at the time it played). Japan-Quiet Life, (because the cyclist always says it is an excellently constructed song). Frankie Valli and Four seasons/Jersey boys- all (with many thanks to the boss this is its second Grand Tour). Pop music by M (don’t know why it just reminds me of being younger listening to the top 40 countdown on my transistor radio while doing the sunday night shower of my childhood). 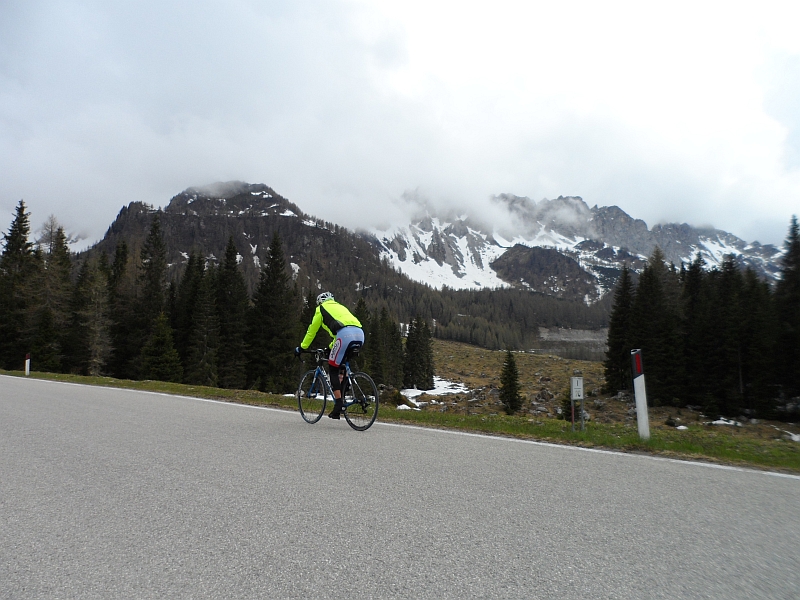